Boy Who Died of Coronavirus Was the Son of An Uber Driver, Who Brought Coronavirus Home, says Lancaster Mayor 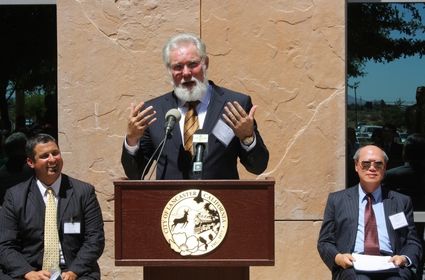 Update, Wednesday night 3/25/2020: LA County Health Dept. officially removed the boy who is the subject of of this article, from the official LA County list of Coronavirus deaths.

It was reported Tuesday that the first minor in LA County died of Coronavirus. But the 17 year old boy's diagnosis is in dispute. In fact, he was never tested during his lifetime for Covid-19, despite his father having been so diagnosed. This according to Lancaster Mayor R. Rex Parris

The Los Angeles County Department of Public Health says that the boy died of sepsis, with coronavirus perhaps being a complicating factor.

Lancaster Mayor R. Rex Parris, speaking to KTTV, says that the boy was the son of an Uber driver, who apparently brought Covid-19 home with him.

Parris also called the LA County Dept of Health "The most incompetent people I've ever dealt with. They didn't test the boy for coronavirus while he was alive. They waited until after he died." Parris asserts they "obviously" should have tested for coronavirus, given the boy's father's diagnosis.

Uber, Inc would not confirm that a local driver had been diagnosed with Covid-19.

Parris was first elected Lancaster's Mayor in 2008. "Currently serving his fourth term, Parris' leadership revolves around the overall well-being of Lancaster residents, with emphasis on public safety, crime reduction, community health and wellness, as well as community and civic pride; all of which have resonated well among citizens and constituent," says his website. Parris is a former plaintiff's personal injury attorney.