Queen Elizabeth: One Day We Will Look Back With Pride In How We Responded to Covid-19

Queen Elizabeth, as she occasionally does, delivered a stirring speech to her subjects telling them that one day they will look back with pride on how they acted during the latest challenge to the United Kingdom, and to the world.

The "disruption in the life of our country," which she said had "brought grief to some, financial difficulties to many, and enormous changes to the daily lives of us all." 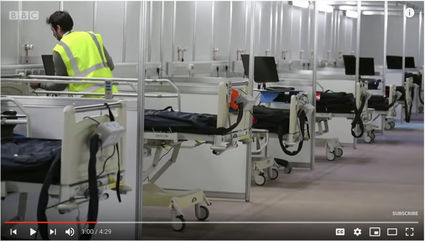 The Queen thanked those on the front line, showing images of National Healthcare workers in Hospitals

"I hope in the years to come, everyone will be able to take pride in how they responded to this challenge," she said. "And those who come after us will say that the Britons of this generation were as strong as any, that the attributes of self-discipline, of quiet good-humored resolve and of fellow-feeling still characterize this country."

Both her son Prince Charles and Prime Minister Boris Johnson, have tested positive for Covid-19.

The message came after the number of recorded hospital deaths in the U.K. among those who had tested positive for COVID-19 reached 4,934.

Ministers have spent the weekend warning Britons to follow the government's stay-at-home rules. Health Secretary Matt Hancock warned at Sunday night's Downing Street press conference that it was "mission critical" to follow social distancing rules to protect the NHS and slow the spread of the virus.