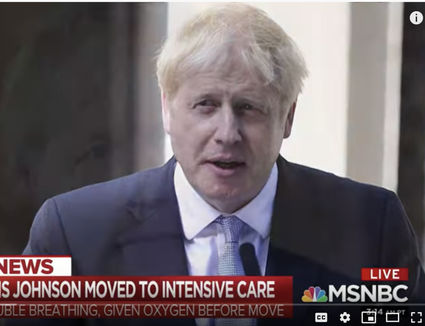 Boris Johnson in intensive care with Covid-19. The 55 year old Johnson has a 38 year old partner who is pregnant with their child.

British Prime Minister Boris Johnson reportedly is not improving. He is having trouble breathing, and may require ventilation soon. Two thirds of Covid19 patients on ventilators never recover.

Boris Johnson was suddenly admitted to hospital 'for testing," then just as suddenly it was announced that he was in intensive care. The 55 year old Johnson has a 38 year old partner who is pregnant with their child.

The 2020 coronavirus pandemic emerged as a serious crisis within the first few months of Johnson gaining the 2019 majority.On 23 March 2020, he issued a "stay at home" order throughout the UK, ordering people not to leave their houses except for a few limited purposes.

On 27 March, it was announced that Johnson himself had tested positive for COVID-19. On 5 April, with his symptoms persisting, Johnson was admitted to St Thomas' Hospital in London for tests.

Despite being admitted after suffering persistent symptoms for 10 days, it was announced on 6 April that he would remain in charge of the government and was in "good spirits".

He was moved to the hospital's intensive care unit later that evening as his condition had worsened, with Downing Street stating that it was a precautionary move in case he required a ventilator and that he remained conscious.[487][488] Dominic Raab was appointed to act as deputy for Johnson as necessary.

Johnson is a controversial figure in British politics and journalism. Supporters have praised him as an entertaining, humorous, Reports from St. Thomas HOspital in London say that Boris Johnson is not improving in ICU

and popular figure, with an appeal stretching beyond traditional Conservative voters and Eurosceptics. Conversely, his critics have accused him of dishonesty, elitism, and cronyism, and of using offensive language. Johnson is the subject of several biographies and fictionalised portrayals.