Defendants released on own recognizance, meaning they are just expected to show up once the courts reopen 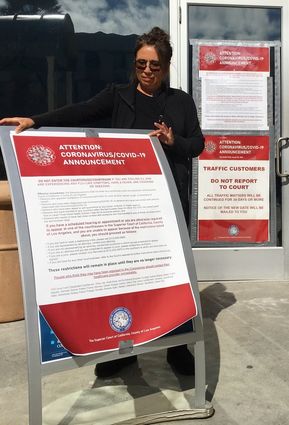 A courthouse employee at the Santa Monica Courthouse, now closed to the public.

On Monday the Judicial Council of California adopted new rules to lower jail populations in the name of stemming the spread of COVID-19. Chief among these is no-cash bail for certain non-serious, non-felony crimes. The Los Angeles District Attorney had already moved to eliminate cash bail for similar crimes in an effort to "reduce the number of people both in local jails and courthouses as part of her office's response to help curb the spread of the coronavirus," as stated in a March 20 press release.

The Judicial Council is the policymaking body of the California courts. Led by the California Chief Justice, the Council is responsible for ensuring the consistent administration of justice across the state's court system.

Under both the county and state guidelines, those who are released without bail are still required to appear for their court date, albeit the new rules allow for remote conduct of hearings. Failure of the defendant to appear will result in a warrant for the defendant's arrest and a possible additional charge of failure to appear on the criminal complaint.

Some serious crimes are excluded from the no-bail releases. Defendants who are accused of murder, rape, kidnapping, and violating a protective order may still have to post cash bail. Other serious crimes, such as first-degree burglary (burglary of a residence) and domestic battery, are also excluded. Even petty theft becomes felony looting if committed under a state of emergency.

A no-cash bail law for California, SB 10, was already signed into law by then-Governor Jerry Brown in August, 2018. However, a referendum to overturn the law gathered enough signatures for the November 2020 ballot, and SB 10 was stayed until that time. Until mid-March, cash bail had still been in effect.

The current pandemic situation is allowing the state of California to see what life will be like if the referendum to overturn SB 10 fails. Out on their own recognizance will be all sorts of deadbeats who, Santa Monicans know, had to do something pretty spectacular in order to gain the attention of the police. Given the shoplifters, grocery-store thieves, and sanitation-disabled trespassers who we are already unable to lock up, the release of those who have actually been nabbed does not bode well.

Just as disturbing is the lack of clear reasoning for the panic-stricken release of criminal defendants from our county and state penal institutions. LA County District Attorney Jackie Lacey says the release will help stop the spread of coronavirus.

Really? How? If she thinks the criminal defendants in jail are harboring COVID-19 germs, then how does releasing them to the outside world help stop the spread of the virus? If anything, it does the opposite.

Assistant Media Chief for the DA's office, Greg Risling, writes that the point of releasing those "who are accused of committing nonviolent felonies and misdemeanors" out of jails and courthouses is "to protect all of the people who work within and use the criminal justice system from potential exposure to the coronavirus."

Oh, great. So the goal of the DA is to protect her staff? Uh...what about protecting the public? Following similar reasoning, it would also be beneficial for the protection of people who work at hospitals to rid the places of COVID-19 patients. 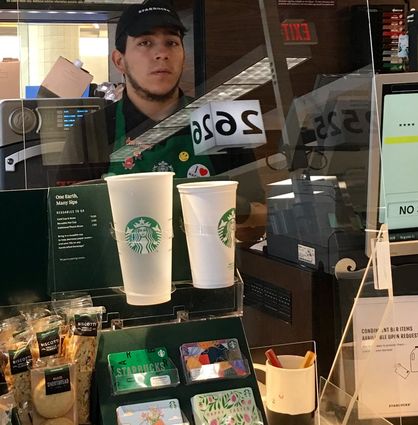 A Starbucks barista working behind a barrier. Everything has changed under Coronavirus.

Risling admits "our office does not have an estimate of how many of the defendants are homeless and are back on the street." But given the types of crimes for which defendants are being released, allegedly nonviolent nuisances, the probability is high that many of them are homeless. Releasing them means taking them out of a place where they have shelter, food, and medical care and letting them fend for themselves on the street again. If these defendants do carry novel coronavirus germs, they are transmitting them to other homeless people and to the hapless public who are constrained to use the same public places.

By use of vague language like "help curb the spread" from the county DA's office and "safely reduce jail populations" from the state Judicial Council's statement, both law enforcement agencies are inelegantly attempting to disguise their true goal. That goal is not to ensure the health and safety of jail prisoners or the public. They wish to protect their own staff from infection, and they wish to avoid the bad publicity, liability, and expense of dealing with a COVID-19 outbreak in the jail population.