A family stood out in the street with their baby for 40 minutes while he was trashing their home, his blood spilling on carpet .... 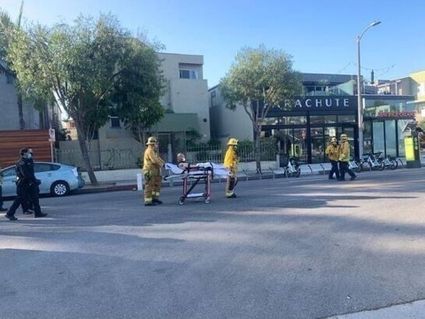 LAFD Paramedics wheel off a homeless man who crashed through the roof and into a family home.

A naked homeless man crashed through the roof of a Venice apartment he was apparently trying to enter. This according to a neighbor, who posted the incident and a photo on social media.

"40 minutes later, after causing a lot of damage and terror, LAPD arrived and tased him," she wrote.

The scene of the crime was Rose Ave in Venice, late Tuesday morning. It was posted on NextDoor:

"This guy broke into an apartment on Rose. Not an easy thing to do in that complex. Trashed the apartment belonging to a couple and their little baby who looked pretty shook up. These are your new neighbors. Make sure to accept it with a smile. I have reported this information to the police.”

Some of the comments from neighbors were interesting. "We live next door to the apartment that got broken into. No clue how this person was able to do this, but he scaled the apartment building and trashed the roof before breaking in." Wrote one neighbor.

“I called the cops because I live next door. It took 40 minutes for them to arrive. The man was naked on the roof. He would not have destroyed the apartment if they got there quicker. They have an infant baby and i had them come to my patio. What is wrong that the response time is taking so long. I’m seriously considering getting a gun. I’m still shaken up."

“From the image, he seems to be restrained with straps on that gurney with abrasions on his shoulders. Usually when you see someone carted away on a gurney, they are being taken to medical care." Wrote another.

"they didn’t have to tase him. He was scraped up but that was it. He caused A lot of damage. I watched the entire thing from my top floor window and was on with the cops until they arrived 40 minutes later SMH" wrote a third.

How irresponsible! He should have at least been wearing a mask.