Paranoid ruler is known to use at least 2 body doubles to avoid assassination attempts. 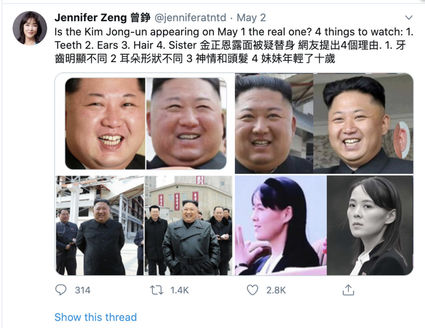 Jennifer Zeng believes the Kim you see is not the Kim we know and love.

Human rights advocate Jennifer Zeng has pointed out on Twitter that the Kim who opened a fertilizer factory on April 30th, appears to have minor differences from the previously pictured Kim.

"Is the Kim Jong-un appearing on May 1 the real one? 4 things to watch: 1. Teeth 2. Ears 3. Hair 4. Sister", Zeng posted on May 3rd. The last being a reference to Kim Yo Jong, Kim's younger sister, who often appears with him. The implication is that she, too, has a body double.

Photos released by the North Korea news service, as proof of the dictators continued life; have raised suspicions that a lookalike could have been there in his place — with web sleuths noting discrepancies in facial, hairline and dental features when compared with previous appearances. 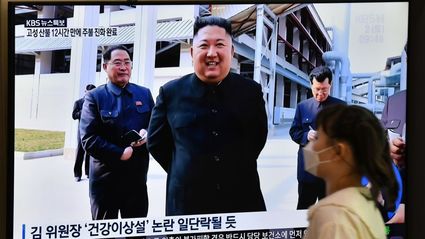 It is a “well-known fact that Kim uses body doubles,” the International Business Times (IBT) says — and the Sun in 2017 posted video seemingly showing the dictator chatting with some of them.

Kim was not seen from March 30 to April 30th, after appearing at a missile launch, a major event in the hermit kingdom. The world speculated that he had died, been killed in the missile launch, had undergone heart surgery, or died in some other manner.

The head of the DPRK inherited his position from his father and his grandfather in 2009. Kim, 36, disappeared for a month in 2014, which was also attended by speculation that he had died or that he was a patient undergoing a serious medical procedure.

North Korea or the DPRK, as it is known, is among the worlds most autocratic and authoritarian states. Kim's government has imprisoned hundreds of thousands of people to continue securing his regime, and killed hundreds, including his own half brother and his uncle.