Target, a grocery store, a pawn shop all looted after death of black man at the hands of police 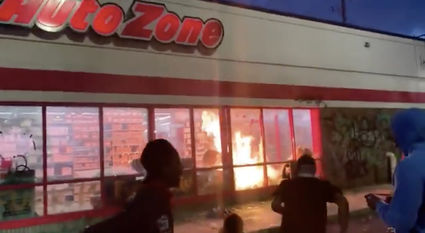 The Auto Zone store in South Minneapolis was looted, then set on fire.

Upset at the killing in custody of George Floyd Tuesday by a white police officer, African-American looters emptied the Target store in South Minneapolis. They wore masks, and took TV sets and other electronics. They emptied the shelves of a large Target, then proceeded to Cub Foods, a grocery store. They set fire to the local Auto Zone store.

"This is not a poor area, particularly" explained one local resident. "It just happens to be across the street from the police precinct where the cops involved in the George Floyd incident were stationed."

"Anyone more concerned about some people looting a fucking target than the murder of George Floyd/Minneapolis PD's history of constant extreme racism and horrible brutality is telling on themselves," said one looter.

"Looters take TVs, clothing from Target during protests in Minneapolis, this crap has nothing to do with George Floyd's Death," said one white resident of the area." 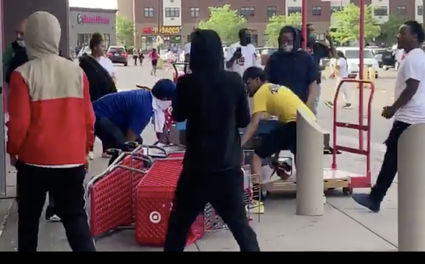 The Target store in South Minneapolis was looted over George Floyd's killing yesterday.

The African American community in Minneapolis, MN is heavily Somali immigrants. But it could not be said whether they were disproportionately participating in the rioting and looting.

"There is an actual riot in Minneapolis with looting and buildings set on fire and local television stations aren't even bothering to cover it... this is so bizarre," tweeted one white gentleman.

"Someone appeared to be on the top of the building asking people below to refrain from looting the store on the corner. That did not stop them. Unknown if it is the owner of the store."

"I don't know what to say, but this makes me sad, angry and so much stiff. #GeorgeFloyd deserves justice for what happened, and protest is justified, but looting target and burning autozone isn't part of a search for justice. #Minneapolis" tweeted Chris Martin.

What the hell does our Somali population jhave to go with the looting, you racists fucks???