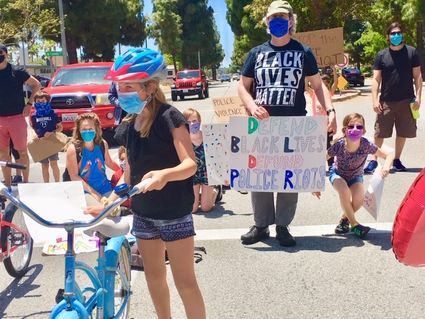 With people protesting worldwide against police violence, the most liberal city in the United States will likely be experiencing major changes over the coming months. What specific direction the movement will take is unclear, but what is clear is that Santa Monica Police Chief Cynthia Renaud will not be around for the final destination. Her days at the top of local law enforcement are numbered whether it be by her choice or the city manager's.

The Observer has no special knowledge about an impending firing or resignation, nor are we necessarily endorsing that either should happen. But the sentiment is too strong following the peace rally gone wrong of May 31 that led to nine fires and more than 100 businesses damaged to varying degrees. An online petition calling for her ousting has reached nearly 60,000 signatures, as of Wednesday. There is no doubt most of those signatures come from non-residents, so the petition's ability to be meaningful is limited. But people who definitely are Santa Monica residents wrote to the council this week in preparation for its vote on an independent investigation of the city's darkest day since the 2013 shooting spree.

"Even before the events of May 31st, her department's responsiveness to the community has been abysmal," wrote resident Murray Greenberg. He called the day of looting "the proverbial straw that broke the camel's back" and further wrote, "seeing our beloved city being looted while police watched (in some cases less than 100 feet away) with cars circling around the blocks to pick up more free goods was disgusting and disheartening."

Several other residents demanding Renaud's removal wrote what appeared to be a variation of a form letter since the wording was similar. But it was not all bad. Santa Monican Richard Gould wrote that he thanked Renaud for "staying calm and keeping the officers calm during recent riots." He added, "Property damage did happen, that is bad. But thanks to our police chief, there was not murder of civilians from the police."

To be clear, he gave her kudos because nobody in her department murdered anybody. That's not exactly the highest compliment, but Renaud should take what she can get. She has also publicly defended herself and her department, but said she welcomes a review of the day. In a June 5 blog post on the City's website, Renaud wrote,"Broken windows can be replaced and buildings can be repaired, but the lives of Santa Monicans, peaceful protestors, my officers, and even the looters, would have been impossible to restore if lost that day."

The council voted 6-0 Tuesday night to open an independent investigation by an organization that does such inquiries. Councilmember Sue Himmelrich, who initially called for the investigation, said after the meeting that "it's important that the City conduct a factual analysis by independent professionals with expertise about the subject matter under investigation; the information gathered from this work will be an effective tool to help us all do better in the future."

But others are demanding much more than a "help us all do better" for the City. They want radical change, even the most radical of them all-police department defunding.

"I am calling for the complete dismantling or defunding of the Santa Monica Police Department," said a phone caller to the teleconferenced council meeting. "If you don't address this and defund the police, you are complicit with the brutality in our community against black people. Are you an ally or a racist? Those are your two options."

Referring to the severe financial cuts touching nearly every aspect of the local government while City management has recommended an increase to the police department's budget, the caller said, "You leave our community out in the cold while you fund a bunch of racists on a power trip. What on Earth are you thinking right now? Black lives matter. Get that through your head and defund the police to fund our community. You work for us. You are all going to be replaced if you continue with this pathetic [expletive]." 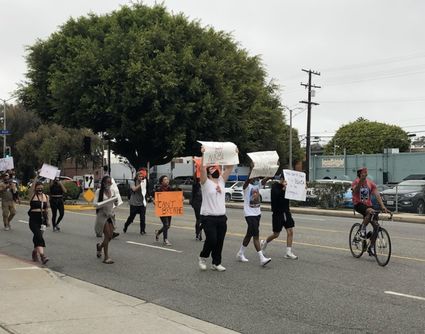 The council asked City staff to present a plan at the final budget meeting on June 29 to move some police department-designated money to other municipal programs. It also voted to sign the Obama Pledge for police reform and for community leaders to create a Black Agenda that a City press release said would "address issues of systemic racism in Santa Monica."

Also at the meeting, the council took the first step toward putting a tax measure on the November ballot to help the City with its massive budget issues. It would raise the rate on real estate sales over $5 million from .3 percent to .6 percent. City officials said it could likely raise up to $3 million in a good economy, but just half that if Covid-19 is still running wild. Councilmember Gleam Davis said she would like City staff to explore how to generate more money via a tax.

"While any money is welcome money, $3 million is not going to go a long way toward solving a lot of the issues we're facing," Davis said. "And those issues only seem to be compounding on a daily basis."

De-fund the police? That's like saying because one doctor was guilty of malpractice and harmed a patient, we should close all hospitals. That kind of thinking isn't going to make anything better, neither is demanding the city cough up millions of dollars for a program that's not needed just when they've cut 400 jobs and millions from the budget because incoming revenue collapsed due to the COVID shutdown. The police don't need de-funded; they need to SHOW UP and do their job when necessary, which they did NOT do during the riots and destruction in Santa Monica. For that, Chief Renaud needs to be immediately dismissed. She intentionally put residents in harm's way when she ordered her force to do NOTHING to protect property or residents. It was only by chance that no one was seriously injured. If anyone had been injured, they could have sued the city for tens of millions of dollars because of the chief's dereliction of duty. A GOOD chief with a fully funded force is the answer here.