Rioters Are Stealing Free Speech Rights from Protestors - Not the Government

Predictably, renewed lockdown orders in California are leading to new riots, usually involving associated "peaceful" protestors. A melee broke out in downtown Los Angeles on Saturday night, with protestors and police engaging in a physical brawl. On Sunday, a crowd blocked Wilshire boulevard in Westwood. These protests were stated as solidarity with the unrest in Portland, where rioters have repeatedly attacked the federal courthouse. God forbid Los Angeles not do their part in the violent virtue-signalling enterprise.

Some of those walking among the people throwing rocks and punches, hammering federal buildings or torching cars consider themselves peaceful. They aren't committing the violence, they claim. They are only there to exercise their First Amendment rights to free speech.

This is not true.

Even if these individuals are not throwing anything or committing any violence themselves, this is not true.

If any of these self-avowed peaceful protestors are anywhere near violence and destruction of property, if their determination to continue their march or their occupation gives cover to the rioters (as it always does), if it makes the job of law enforcement more difficult in their efforts to halt the violence, then they are rioters. They are criminals. They are doing just as much damage as the people they try to point to as the "real problem."

The violence always begins with a peaceful protest and a core group of individuals who believe or claim they only want their voices heard and to hold up signs on a street or a park. The troublemakers, who may or may not share the concerns of the peaceful protestors, arrive and use the First Amendment license of the core group in order to gather their own forces and then attack buildings, unlucky individuals, and police.

Once the first rock is thrown, once the first punch is lodged, the peaceful protest is over. Finis. It is now a riot. I don't care if it's only one person throwing rocks (but it never is only one). Whoever sticks around is hampering law enforcement's ability to stop destruction of property and persons. Whoever sticks around is giving opportunity to the thugs. That makes these remaining protestors complicit. They are now part of the riot.

And yes, throwing a rock or shoving a police officer and even blocking a road are all non-peaceful acts. Even the latter is a unacceptable restriction the freedom of others to travel on public roads. One person's freedom does not trump another's. No, not even if one feels the cause is justified. 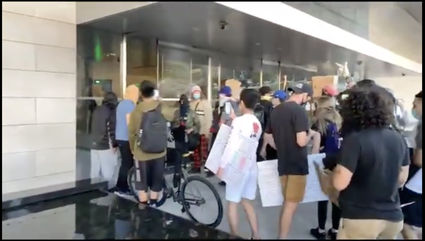 "BLM/Antifa Los Angeles just shattered windows in DTLA courthouse and assaulted police. This is now the second assault on officers this evening following the detention center." Anthony from Twitter

It is truly tragic when evil, violent individuals ruin an otherwise peaceful exercise of First Amendment rights. But those evil, violent individuals - and no one else - are responsible for the end of the protest. Because once violence to persons or property occurs, the freedom of the victims takes precedence over all others. They are being deprived of property and life. Therefore, it's not the police or National Guard who are responsible for the curtailing of the core group's First Amendment right to free speech. It's the rioters.

Conservatives on college campuses have had to get used to this sort of curtailing of their free speech rights for years now. A peaceful lecture is interrupted by a self-righteous mob who crowd into the lecture hall chanting over the speaker's voice. These loud boors believe they are exercising their First Amendment right to protest the content of the lecture. In reality, they are stealing the First Amendment right of the lecturer (and that of the audience).

The only remedy for dealing with thieves of the First Amendment is to cease allowing them to commit acts of terror and violence. They must be forcibly removed from the scene - exactly as they have forcibly entered it. Only then can the truly peaceful enjoy their God-given rights that our United States Constitution guarantees us all.