SMMUSD's New Anti-Racism Curriculum May Do More Harm than Good

It is the task of the public school system to create unity, not division 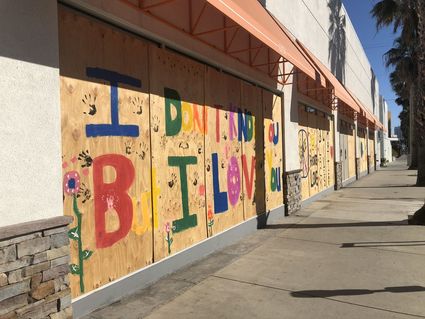 Ulta Beauty in Santa Monica is closed and boarded up, with "I don't know you but I love you" painted on the boards.

Santa Monica-Malibu Unified School District Superintendent Ben Drati sent an email to parents and the public outlining the district's plans to combat racism, including a website of parent resources, social justice standards for different grade levels, a revised United States History curriculum, and the future participation of the district in a Black Lives Matter at School Week of Action in February.

Although some elements of the plan appear to have been in the works for months, other elements seem hastily considered and more the result of a knee-jerk response to current events than careful thought.

The website of parent resources appears to have been thrown together in one afternoon, linking parents and educators to the websites of other groups where extremist ideologies are either not far beneath the surface or are explicitly exposed. The social justice standards ask young children to group themselves into narrow identities with contradictory messages on how to think about those identities, and the district's history curriculum has always been a far-progressive distortion. As for the participation in a Black Lives Matter action week, it is beyond the bounds. Calling Black Lives Matter partisan would be putting it mildly.

In looking at the new social justice standards and the revised history course, there is enough vagueness to hope that a sensitive teacher would not necessarily alienate every child in the class. In addition, some of the standards are simply basic civility and healthy thinking. For example, one of the K-2 standards is "I can feel good about myself without being mean or making other people feel bad." It's hard to quibble with that.

But other standards make less sense and one wonders about any evidence-based data to support bringing up race and identity explicitly in kindergarten. (Or anywhere.) For example, another kindergarten-level standard asks a child to be able to "name some of my identities." Why? Why is it important for a child to partition themselves off into a group it may not have even occurred to them exists? And what if the child can not point to any explicit "group identity" to which he belongs while others can? This sort of demand is suspect in its goal. Are we TRYING to get kids to separate off into identity-politics cliques?

The standards go on to ask children to learn, ponder, and even obsess over how people of some groups have been persecuted because of their identity. Even in kindergarten. Five-year-olds are to be taught "people have been treated badly because of their group identities, and I don't like it." Where's the common sense? Of course it is appropriate to bring up prejudice and persecution upon relevant occasions, such as when students (much later than kindergarten) are learning about slavery in the U.S., Jim Crow (much later), European immigrants in the 19th century, and the Holocaust (much later). Allow them a grounding in being able to feel good about themselves as human beings with commonality, and don't force - or even allow - them to consider themselves (from five years old) as either victims or oppressors.

The district already ran a long-term experiment in forcing students to obsess over the victim-oppressor roles of various group identities. Samo required a course called Freshman Seminar. The course curriculum consisted of a cherry-picking through U.S. history for every situation where one group suffered by the hands of another. As far as producing racial pride or harmony, the class was a colossal failure. At one meeting with the principal, every parent - representing Asian, black, white, Hispanic, and Jewish - reported their child came home from the course feeling ashamed of their identity. The next year, the principal (not the current one) revised Freshman Seminar.

It is the task of each individual group to solidify their members' sense of identification and belonging to that group. It is the task of a public school to provide the place where all of those individuals belong to one community, the United States of America. Inculcating pride in the true greatness of this country's founding ideals and documents, its real triumphs along with its sins, is a place of true potential for creating a sense of unity. When everyone perceives they belong to one great place, equally, is when you have a chance at racial/ethnic/whatever harmony.

Superintendent Drati is correct in his email when he states, "We bear a great responsibility as educators for shaping society." So it is disheartening to see the new U.S. History curriculum take on many of the cherry-picking aspects of the old Freshman Seminar. In the course overview, we are promised 11th grade students will be viewing the country's history "using a social justice lens." Again, why? Would it not be better, both for the students and for society as a whole, to teach them to look at history with a scientific and critical mind? Whatever ideological indoctrination is taught today will be yesterday's news by the time they graduate college. At the rate cultural norms have been changing, it might be even faster than that. Give students the flexibility they will need to weed out ideology from fact as they must react to the events through which they will end up living.

In addition, the history curriculum promises to weave through the course the 20 Social Justice Standards created by Teaching Tolerance. First of all, Teaching Tolerance is anything but tolerant. It is a pro-black, anti-white organization which is very unfortunately listed as a district resource for educators. On their website, you will see such statements as "why we can't talk about racism without understanding the social construct of whiteness." They also promise to give a "firm definition of white privilege" and to explain that colorblindness is only an attempt to "mask racial caste." As an aside that may seem trivial to some, the website wants to discuss "Invest-Divest," this is code for the movement to eliminate the Jewish State of Israel.

While these terms and tropes are the flavor-of-the-month in radical progressive circles and are filtering in, like the latest hip beverage, to pollute more moderate liberal territory, they are completely untested, unproven and highly ideological notions.

At the very least, if the district wants to try out the whole white-people-are-the-devil-and-responsible-for-every-ill-and-good-experienced-by-black-people (one of the most racist, patronizing theses ever devised), they should also include opposing perspectives from those who do not perceive matters in quite the same way. Thomas Sowell and Shelby Steele come to mind as eminent scholars and excellent writers - both black - who see the race relations in a vastly different, and far more critically evidenced manner. Sowell, an economist, wrote Discrimination and Disparities among many others. Steele is the author of White Guilt: How Blacks and Whites Together Destroyed the Promise of the Civil Rights Era - also one of many erudite tomes. 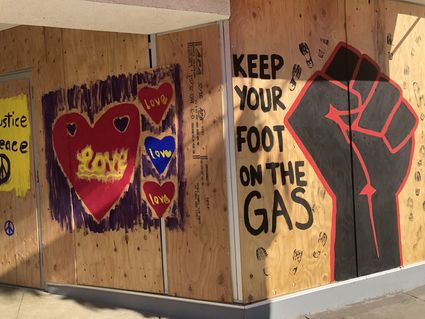 Ulta Beauty in Santa Monica is closed and boarded up, with black power symbol painted on its side.

If the district wants to encourage black students to feel powerful and enabled, confident in their abilities to tackle leadership positions, I can think of no better mentor than either Sowell or Steele, who both demand blacks take personal accountability for their lives. This is, after all, the only way any individual, of any race, creed, or religion, is going gain self-respect and become truly successful in the world.

But when it comes to diversity, SMMUSD has always missed the mark regarding true diversity, that of thought. Only one narrative is allowed by both students and teachers. Only one narrow slate of opinions is acceptable. With Drati's "anti-racist" initiative, that slate becomes even narrower. Those with different thoughts, including those on how best to combat real racism, will be shunted to the side if not ostracized and punished. This is a good way to raise a generation of citizens who hate themselves and each other.

Thank God someone is calling out this Marxist left wing garbage. Hats off to you. I made the mistake of raising my daughter in Santa Monica. I mistaking thought my influence as a patriotic American with traditional values was enough to inoculate her from this evil CRT philosophy. Unfortunately I failed.

Wow, this is insane, extreme right-wing nonsense. Teaching Tolerance is anti-white? You are a nut job, no one should listen to this person. Here is some of the abundantly available information about why it is necessary to engage even young children in anti-racist learning and conversations about race: https://www.healthychildren.org/English/healthy-living/emotional-wellness/Building-Resilience/Pages/Talking-to-Children-About-Racial-Bias.aspx

The author wrote: Are we TRYING to get kids to separate off into identity-politics cliques? YES they are! Public schools are nothing but social experiment brainwashing centers that turn innocent children into the raving social justice agitators of the future. In public schools, there is really only one course being taught regardless of the subject matter, and that's Marxism 101. Josef Stalin said, Give me the child until age ten, and I'll give you a communist for life. THAT'S what's going on. Parents MUST call for Drati's resignation NOW or their children, as young people with morals and values taught by mom and dad at home, will be unrecognizable to them in a few short years.