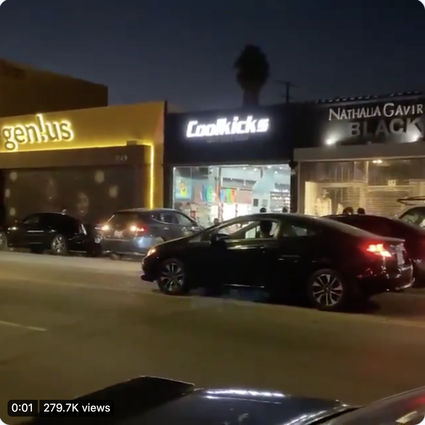 A man drove a car into the Cool Kicks store Monday evening. It was not immediately clear whether this was connected to a shooting earlier Monday afternoon in South Central Los Angeles

Los Angeles was the scene of yet more protesting on Monday night, after an incident in which Los Angeles County Sheriff's Deputies shot a suspect in their custody Monday afternoon. The deceased individual has been identified as Dejon Kizzie.

Sheriff's say that Kizzie, an African American male, punched one of the deputies in the face after a foot chase. He then dropped a bundle of clothing containing a handgun, Sheriff's deputies said. When he tried to pick up the gun and fire it at the deputies,

This happened at about 3:15 pm on Monday afternoon, at 109th and Budlong. Kizzie was initially stopped by Sheriff's deputies for a vehicle code violation. LASD reports that the man was confirmed to be in possession of a handgun. They say he resisted arrest.

After a call to action by BLM in LA on Twitter, a crowd gathered in Downtown Los Angeles. 250 people waited to hear more about the suspect, who did die in the incident.

"BLM rioters in Los Angeles are beginning to riot and loot tonight after a police-involved shooting of a black male. Here, they drive a car into a shoe store. #BlackLivesMatter," tweeted Andy Ngo.

The Coolkicks store is on Melrose Avenue, which is not South Central Los Angeles. The store is located in West Hollywood rather than South LA, so it's unclear whether the incident was connected somehow to the shooting earlier Monday afternoon.

This image is from a store on Melrose in West Hollywood, nowhere near South LA, with no confirmed connection to the shooting and protests. Great job creating fear by distorting reality though!