The Oregon Coast Looks Like The Surface of Mars due to half a million acres on fire. 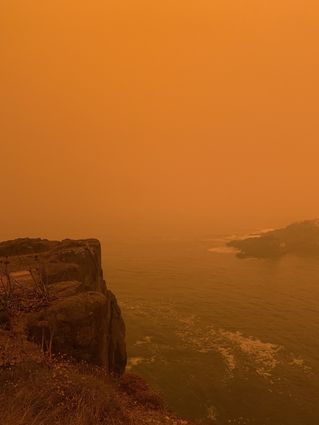 Emily says she took these photos at 10 am from the Oregon Coast, with no filters.

There are currently 20 large #wildfires burning 476,027 acres in Oregon & Washington. Extreme fire weather continues across the region. We all need to do everything we can to minimize every single spark because, w/these conditions, a spark could easily result in a wildfire," tweeted the Oregon Fire Service.

A young woman named Emily took a set of 4 photos from the Oregon coast, that are, well, eerie.

Many communities are enduring evacuation orders, including in Marion County’s Santiam Canyon and in the area around Hagg Lake in Washington County.

Jim Giordano captured video of crickets chirping at 11:00 a.m. in Turner. The video, which he said shows up brighter than the natural eye, shows an eerily orange sky and dim backyard. 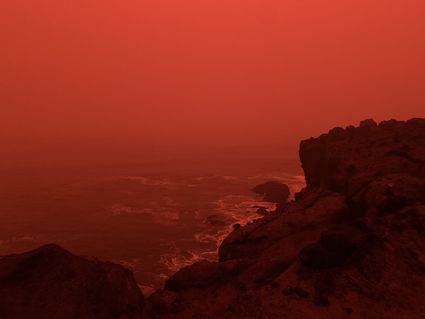 Emily says she took these photos at 10 am from the Oregon Coast, with no filters.

“It’s 11 o’clock in the morning and the crickets are chirping ’cause they think it’s nighttime, because of all the smoke in and around Turner right now,” Giordano remarks as he records the scene.

Powerful winds with even stronger gusts continued Tuesday morning across the Willamette Valley, knocking down trees and power lines, and fanning the flames of numerous fires.

Approximately 115,000 customers of the major Oregon power companies had their power go out Monday night. As of 10:30 a.m. Tuesday, that number was still close to 90,000. A couple thousand Clark County residents were also without power.

The high wind warning expired at 1 p.m. Tuesday, but the region will remain breezy for the next couple of days and a Red Flag Warning for increased fire danger continues through Wednesday.