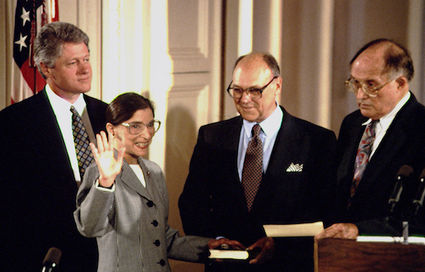 Justice Ginsburg being sworn in as Supreme Court Justice. She died on September 18, 2020 of metastatic pancreatic cancer at her home

Supreme Court Justice Ruth Bader Ginsburg has died suddenly at the age of 87. She died on September 18, 2020 of metastatic pancreatic cancer at her home, her office announced. She was known to have had at least 3 surgeries for cancer over the last 3 years.

A favorite of the left, Ginsburg was the author of some of the Court's most far reaching and liberal rulings, and the longest serving justice on SCOTUS.

Her death will greatly complicate the US Presidential election, which was already contentious. It means the next President will be able to make at least one appointment to a divided high court, the serves a highly divided United States.

"She was equally known for impassioned dissents on major social issues—from affirmative action to equal pay—which earned her a sort of rock-star status among progressives and inspired lawmakers on how to legislate social change." ABC News tweeted.

"Ginsburg was important because she stood for individual rights. While Justice Roberts has moved to the center on some important issues, there is concern that the next justice will shift the balance of the court away from individual liberties," said Professor Jefferson Tribe, of UC Merced School of Law.

Senate Majority Leader Mitch McConnell said that a Trump nominee to replace Ruth Bader Ginsburg on the Supreme Court will be voted on by theUS Senate prior to the November 4, 2020 election.

She was born Joan Ruth Bader, March 15, 1933. Ginsburg served as an associate justice of the Supreme Court of the United States. She was nominated by President Bill Clinton on June 14, 1993 and had served since August 10, 1993. Ginsburg became the second of four female justices to be confirmed to the Court after Sandra Day O'Connor, the two others being Sonia Sotomayor and Elena Kagan, both of whom are still serving in 2020.

Following O'Connor's retirement in 2006 and until Sotomayor joined the Court in 2009, she was the only female justice on the Supreme Court. During that time, Ginsburg became more forceful with her dissents, which were noted by legal observers and in popular culture. She is generally viewed as belonging to the liberal wing of the Court. Ginsburg has authored notable majority opinions, including United States v. Virginia (1996), Olmstead v. L.C. (1999), and Friends of the Earth, Inc. v. Laidlaw Environmental Services, Inc. (2000).

Ginsburg was born in Brooklyn, New York. Her older sister died when she was a baby, and her mother, one of her biggest sources of encouragement, died shortly before Ginsburg graduated from high school.

She then earned her bachelor's degree at Cornell University, and became a wife and mother before starting law school at Harvard, where she was one of the few women in her class. Ginsburg transferred to Columbia Law School, where she graduated tied for first in her class. Following law school, Ginsburg entered into academia. She was a professor at Rutgers Law School and Columbia Law School, teaching civil procedure as one of the few women in her field. 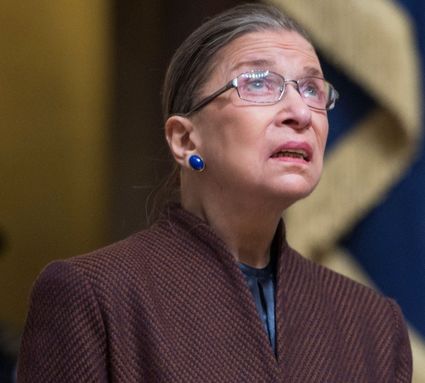 She died on September 18, 2020 of metastatic pancreatic cancer at her home. Her death

Ginsburg spent a considerable part of her legal career as an advocate for the advancement of gender equality and women's rights, winning multiple arguments before the Supreme Court. She advocated as a volunteer attorney for the American Civil Liberties Union and was a member of its board of directors and one of its general counsels in the 1970s. In 1980, President Jimmy Carter appointed her to the U.S. Court of Appeals for the District of Columbia Circuit, where she served until her appointment to the Supreme Court. Ginsburg has received attention in American popular culture for her fiery liberal dissents and refusal to step down; she has been dubbed "The Notorious R.B.G.", a play on the name of the rapper known as "The Notorious B.I.G.", in reference to her notable dissents. She was the first Jewish woman to serve on the US Supreme Court.

She died on September 18, 2020 of metastatic pancreatic cancer at her home