By Charles Leipziger
Special to the Observer 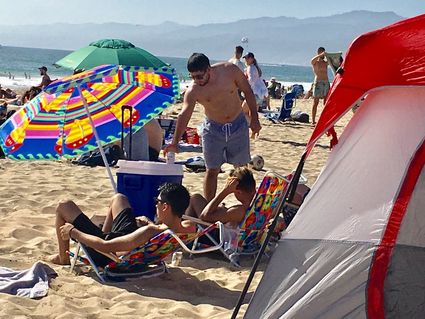 As I write it has been more than 5 months since the Covid 19 pandemic spread around the world.

My Dad was upset with me the last time we had dinner in New York. He was bothered because I was working at a job that paid me cash under the table. The job had been going on for years. He had a lot to say that night. After 40 plus years practicing law it sounded like he had prepared for this moment. Dad was always trying to make the case for one thing or another. What was uncharacteristic was that he was letting his emotions show - he was visibly irate." You're 46 years old " he said. "You can't scam the system forever " he barked like a dog. Little did I know that one week later he would drop dead of a heart attack.

4 days after Dad died, I sat in the cemetery, shattered. My sister and I stumbled through burying this man I had struggled to love and accept. Dad was gone now and I understood it was time to grow up. Almost a year after Dad's death, on a chilly winter day, I found myself sitting with some elders who served as my mentors. " Would you bag groceries? ", my friend Alan asked. On that day, the mourning had ended momentarily. " I would bag groceries ", I said in answer to Alan's question.

Another month elapsed. Then my mother encouraged me to apply for work at Sprouts Farmers Market. The job paid $15 an hour. After a brief interview with the store manager I was offered part-time work as a courtesy clerk. This was in November of 2019. I'm still working at the market.

As I write it has been more than 5 months since the Covid 19 pandemic spread around the world. My responsibilities at the market have changed. And my attitude has shifted almost every day.

Wednesdays are one of my usual days at Sprouts. The alarm goes off at 5:30 in the morning and my day begins. It's still dark as I stumble around my studio apartment preparing breakfast, brushing my teeth, and putting on a clean Sprouts issued company T-shirt. At 7 AM I clock in at the market. I walk into the break room and put my breakfast bag in the refrigerator. One banana, a recycled bottle filled with orange juice, and the protein bar. I'll need all the nourishment I can get before my shift is over. After I clock in I visit briefly with Davey. He is one of the supervisors. He takes my temperature. After he gives me the A-OK I start work. Once I'm on the floor in the market proper I put on gloves. We wear masks at Sprouts because it's a city ordinance that you cannot enter the store without a face covering.

From 8 AM to 9 AM senior citizens trickle in followed by the insta-cart shoppers. They're the workers that shop for people and deliver the food door-to-door. Abigail is a cashier on Wednesdays and also works at another market for a total of 6 days a week. I honestly don't know how she does it. I guess God gives her a lot of strength. While the seniors get their hour to shop, I go to work in the parking lot collecting shopping carts and bringing them to the front of the store to be disinfected by Freddie.

Freddie is one of several employees that show up from week to week and works tirelessly without complaining or grumbling. Freddie works in the parking lot eight hours a day disinfecting shopping carts and baskets. I catch up with Freddie on how he's managing to make ends meet. He works three days a week the same as me. But he has a second job at a Japanese take out restaurant.

Pushing the shopping carts around the parking lot is mindless physical labor and I don't like it one bit. But no one is forcing me to show up. I'm choosing to come to work. Every once in a while on Fridays, when we get paid, the company issues bonuses. When I'm at the bank, cashing the bonus, I tell myself Sprouts is a good company.

At 1:30 PM Sarah shows up. Recently she was promoted to a supervisor position. I think Sarah worries about me when I am in the parking lot doing extended shopping cart duty for hours at a time. It wears me down and I think she sees my frustration. It seems that, whenever she can, she corrals me into the air conditioned store to " do go backs ". These food items need to go back in the refrigerators or they will spoil. As I roam through the store replacing merchandise on the shelves I am often stopped by pompous, entitled, rude people. " Do you have this ", someone will say shoving an iPhone in my face with a picture of pesto sauce. I don't take offense. By 8 PM most of the foot traffic in the market has ground to a halt. This is the time I use to empty the trash cans in the produce department, the restrooms, and the employee restrooms downstairs.

Sprouts frequently holds morning conference calls with dozens of store managers spread out across California. Steven is our store leader. He was the first to tell me that a customer had written a letter to corporate complaining that the parking lot was littered with shopping carts. So what we get daily is an earful of " make sure all of the carts are in the front of the store. Some days I will work more than 2 hours without a break in the afternoons gathering shopping carts, disinfecting them, and putting them in the corrals in front of the store. On a hot day with a parking lot jam packed with cars coming in and out I struggle.

Why do I come back week after week? It's my job. And it's my name on the paycheck.And my name is my Dad's name. Last month I made enough at Sprouts in four weeks to pay the rent. I received a stimulus check from the US government in the amount of $1200 dollars. I tucked it under my mattress. I may need it on a rainy day. My mother squirrels money away in various places in the same fashion and I have inherited her frugality. 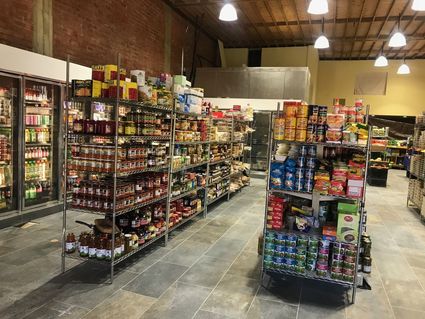 My responsibilities at the market have changed. And my attitude has shifted almost every day.

It is a Friday morning and Abigail and I are chitchatting. It is early, maybe 7:30 AM, and few people have showed up to shop. We are adults, Abigail and I, and we are being honest. " How long have you worked here?" I asked her. Five years she says. It wasn't supposed to be this long. Her voice trails off. Now I am quiet.

I don't want to blink and be 53 years old, five years down the road, still working as a courtesy clerk pushing shopping carts.

At night, sometimes, near 12 AM, I find myself driving home in silence. I feel beat up and worn down. Round midnight I think of my Dad and how proud he would be of me for making strides toward being fully self-supporting. I wonder what he would say if we were sitting at an Italian restaurant in Santa Monica. " I'm drinking more Compari, more than I used to ", he'd say. " It's good for you Pop." Come September, I can hear him saying, " this courtesy clerk job at Sprouts may be the best job available to you. Hold on to it." Even in this respect he is right.