Halloween: Bury Those Cringeworthy Old Standards for a Younger Generation of Costumes More Relevant to our Crazy Times

"Nothing about 2020 could make this costume route more tasteless than it already is....." 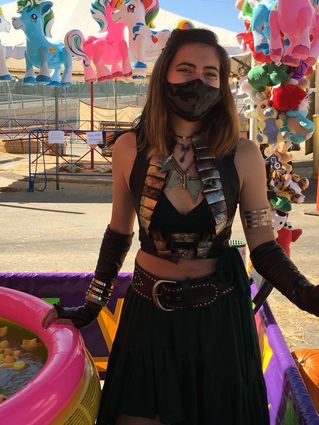 Megan Colburn as a sexy pirate..... I thought pirates were men??

Usually, September and October are the months when we can look forward to walking around the neighborhood, admiring the front yards of Halloween-loving homeowners who go all out with decorations. This year, however, looking at the polystyrene figments of the macabre that adorn only a fraction of entryways, I must admit the typical elements that have become party-store staples in recent decades, just aren't so appealing. Zombies? Please. During the eight-month quarantine most of us have begun feeling, dressing, and talking like the living dead. Tombstones and sheet ghosts? Many of us who have recently lost someone to illness, violence or suicide would be happy to receive a visitor from the spirit realm. Hellfire just isn't interesting when your internet and your forests have already been a fiery hell for months. And bats... let's not even go there.

I don't believe we should relinquish Halloween just because this year is already scary enough -- to the contrary, I believe that upholding this sacred commercialization of a superstitious rite whose original meaning has been lost to the ages, is one way to put some spice back in our dullifying quarantine routines and bring us together as a community (in a socially-distanced way, of course.) I just think it's time to bury some of the cringey old standards in exchange for a younger generation of costumes more relevant to our crazy times. Although, a few of the classics will never be dethroned. I'll talk about those as well, in this list of the best and worst costume ideas for Halloween 2020.

Comply with masking protocol and look super cool in a macabre bird mask (doctors during the bubonic plague believed stuffing the beak-looking thing with aromatic herbs would counteract their exposure to infected air.) Help others follow social distancing guidelines (by force if necessary) the same way they did in 1347: with a sinister cane. Bundle up against the October chill (where are you, October chill?) in a long black robe you could make yourself from a sheet. This costume is likely to see a surge in popularity this year, and for good reason: it's literally the perfect fit for our times.

The classic zombie movie/book/game storyline: a plague sweeps the land, decimates the population, leads some people to form tight-knit survival teams while others are turned into the walking dead, and forces the latter to eat poorly (as in, raw brains and guts.) The 2020 storyline: a plague sweeps the land, dents the population, forces survivors into isolation, turns them into the telecommuting undead, and causes them (via stress and reduced grocery store access) to eat more junk food. Now that the fantasy of a zombie plague has essentially become a reality, the undead are less creepy, less interesting, and less fun.

The helmet and mask will not only keep you Covid-covered, but will also obscure your identity, so no one will know you're too old to be out trick-or-treating and just doing this because everything fun for adults is still canceled.

Again with the bats? Plus, the mask covers every part of this superhero's face except the parts you actually need to cover in a pandemic.

This term for an entitled middle-aged woman has gone viral (no pun unintended). If you have or are a mom, the outfit is already hanging in your closet. You could push a grocery cart (which doubles as a candy hauler), and you could wear a mask printed with a pair of frowning, wrinkled lips representing the stereotypical Karen who refuses to wear a mask. Or, if you don't mind spreading germs and potentially being fined/arrested, skip the mask and go nude (no, not like that!)

Other than looking cool, the most notable thing about the dinosaurs is that they went extinct. This year's tribulations have got some people worrying (or hoping) that humans might be next. With a triceratops helmet or a T-Rex mask, you can be an embodiment of societal decay and a blockbuster movie character, all in one fell swoop!

How unsanitary! Do you know how hard it would be to suck blood from someone's neck while standing at a Covid-safe 6-foot distance? If the still-too-recent Twilight craze taught us anything, it's that vampires are neither sexy nor are they all that scary... though they are a bit creepy. Like the same way that 55-year-old man peering through the windows of a Forever 21 is creepy.

With a wig (or an upcycled cobweb), some orange face paint, and a suit, you can transform into the creature that 6 out of 10 Angelenos find most terrifying! (***Statistic is merely a guesstimate... you could even say it's Fake News. Hmm... could that be another concept costume?)

Parents, you've already taught your small children the hard lesson that they must retire the Native American Costume and the Mariachi Costume, or they risk incurring brutality from the identity politics police. Now it's time for a different, slightly contradictory lesson: the actual police are also not a cool costume idea. If your kid wants to grow up to be a police officer, they'll have to keep it to themselves this year or risk getting maced.

It's cultural appropriation, but it's acceptable because of the skin color of the people whose culture you're caricaturing and butchering with no knowledge of your costume's inaccuracies. On the more practical side, you can use the stereotypical horned helmet to head-butt anyone who tries to get to the best candy before you do! [Disclaimer: Santa Monica Observer Newspaper does not endorse and cannot be held responsible for Viking maulings unless otherwise noted.]

You want to scare people, not kill them of a heart attack (a hospital visit is a real mood-killer, even on Halloween.) The events of this year have revealed that our privileged society nowadays has more trouble than ever before in history with wrapping its mind around the concept of mortality. Death-phobics who have spent the last nine months cowering in fear of death will not be amused by a visual reminder. Plus they might throw something at you. The other problem with any costume involving a skeleton is that all of LA's anorexics, who have been getting worse and worse quarantined in their homes with no one to drag them out to get help and nothing to do but obsess over their body image, will be more triggered than ever to see a skeleton, even in costume form.

Public aquariums were the only chance most people ever got to connect with sea life. Most of these aquariums have been closed for a long time now, and people's awareness of sea life (and the damage we're inflicting on it with all our disposable plastic trash [including PPE]) is waning. The classic jellyfish costume can remind people not to leave their used mask in the gutter where it might end up in a sea turtle's digestive tract... also, jellyfish are cool and pretty.

Update: The Ghost of a Specific Profession that has been decimated by the Covid Crisis

With the protracted lockdown stretching across the year with no end in sight, many have begun crowing some rather extreme proclamations: "This is the Nail in the Coffin for Movie Theaters." "Spectator Sports are Dead." "Is This the End of Live Entertainment?" No one knows the future, but consider tweaking your generic ghost costume to represent the diaphanous spirit of one of these businesses or professions. 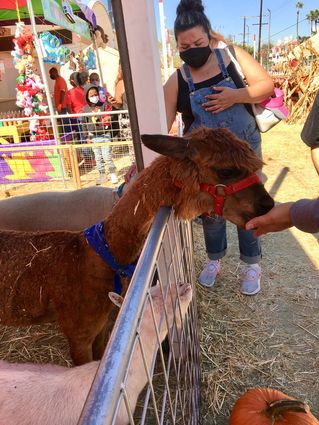 First of all, the latex mask would totally clash with the Elizabethan bling of a traditional fairy princess. Secondly, who would let their child dress up as a member of the tyrannical 1% of days gone by? It's politically incorrect and insensitive. Instead, how about dressing up like an equally evasive, equally magical, yet more proletariat-friendly creature? Just print out some fake checks, paste them onto a fairy-wing frame, drench the whole shebang in glitter-glue, and you're done!

Start with the poop-emoji costume. Add some number-shaped helium birthday balloons. If desired, sprinkle pictures/models of viruses on top. Add any other accessories you'd like (such as garbage or memes) and you're ready to go!