After an examination of information available on news channels and credible websites, an expert in voter software concludes that the 2020 US Presidential election was rigged. 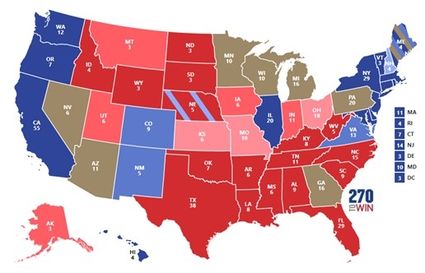 Map showing electoral votes for each state. After an examination of information available on news channels and credible websites, we conclude that the 2020 US Presidential election was rigged.

"Vote, Vote, Vote!" was the common call-out by every politician last month. So I did. I voted in person, I voted by absentee ballot, and I voted by mail-in ballot. No one stopped me. No one checked me. I even voted for every mail-in ballot that I received at my home address – 4 more. This was fun even though I know it is wrong. But getting results by any means is okay, right?

Hell no. That's not the American Way. We do it right. We do it better. We are the envy of the world.

But not this time. We used Dominion and Smartmatic software, both the disgrace of the world. Smartmatic is run and cofounded by Antonio Mugica out of Venezuela. Dominion hardware is a company out of Canada.

(and Hell no, I didn't vote more than once, but I easily could have done so.)

We think so. Let's look at the information filling the news channels and filling websites that are credible.

The legal eagle Sidney Powell states "It was the software that was a problem... Every state that bought this software should have a criminal investigation." Sidney Powell continued, "We have enough evidence of election fraud to launch a widespread criminal investigation. "I don't make comments without having the evidence to back it up," she added, saying that elections software switched "millions of votes," shifting them from Trump to Democratic candidate Joe Biden.

Interestingly, even Senator Amy Klobuchar (D-Minn.) - the Ranking Member of the Senate Rules Committee with oversight jurisdiction over federal elections - joined by Elizabeth Warren (D-Mass.), Ron Wyden (D-Ore.), and other Democratic lawmakers had expressed concerns about the security of the voting systems in a 2019 investigation into the 3 major voting systems companies: Dominion Voting Systems, Election Systems & Software, and Hart InterCivic.

Per the website http://www.klobuchar.senate.gov, the official website for the Senator, it states in March 2019 that "voting and cybersecurity experts have begun to call attention to the lack of competition in the election vendor marketplace and the need for scrutiny by regulators as these vendors continue to produce poor technology, like machines that lack paper ballots or auditability."

Who could have changed the vote?

The key issue in software is the ability to rely upon the results. The second issue is whether there are 'manual overrides' or 'backdoors' that allow a software program to 'adjust' during a count.

Typically, the overrides or backdoors are based on 'access rights' being granted to a level of authority such as 'administrator rights.' Only the people with this level of access could make such an 'adjustment' to the count. These are the people that we need to talk to right now. These people are the ones that the Auditors need to interview in order to identify the actions they took during the election vote count especially in the early morning hours on November 4, 2020.

How do you check if the voting machines are working properly so that you can audit them to assure us, the voters, that our vote was properly counted?

2. TRACEABILITY: We have all had the experience of creating a relationship between many parts. You can think of it as last names. Everyone in the family ZYX is related to this group. However, when it comes to ballots, use the example of a Purchase Order where every piece of paper relates to the PO number such as the Invoices relating to the PO, the Bill of Lading, the Name of the Vendor, and the Items listed. In this way, we can 'match' all the pieces of paper to the "family name" or the identifying unique number (think Social Security number or other single-use number). So, when you receive a ballot by mail or in person, there is this identifying unique number that is associated to YOU. This number would be on the envelope that you signed, the ballot that includes your vote, and the ballot that was provided to you. To do the 'match', we pull together every document with this number and then the 'match' to trace the source of the vote can be made.

Does the Math Make Sense?

Statistically speaking, the typical election receives ballots from less than 60% of the voters eligible to register. So, for example, when the statistics come out that there are 100,000 registered voters in a State and 75,000 votes were counted, then 75% of the registered voters cast a ballot. That is unusually high. Even for an emotionally charged election. Yet over 20 states had a turnout of over 70%, the largest since the year 1900.

• For the 2008 Presidential Election, with Obama-Biden running on the "Hope and Change" platform, there were 229 million people in the voting eligible population of which 146.3 million were registered voters and only 57.1% showed up to vote.

• For the 2016 Presidential Election for Donald Trump running against Hillary Clinton, per http://www.census.gov, voting-age citizens numbered 224 million and 157.6 million or 70.3% were registered and that 137.6 million or 59.2% actually voted.

• For the 2020 Presidential Election for Donald Trump running the "Law and Order" platform against Joe Biden running the "BuildBackBetter" platform, it is estimated that, of the 239 million registered voters, between 159 million and 165 million or between 67% and 72% cast a ballot. 2020 is the highest voter turnout since the year 1900.

Thus, over 16% more people voted in 2020 than in 2016. That equates to over 22 million additional votes. That's enough to swing from Red to Blue when millions of votes are added or switched. This is a problem. Especially when comparing 2008 to 2016, where only 5.5 million more people voted representing an increase of just 4% more votes. That means that voter response is 4x more in 2020 than 2016. That beats the trend by a questionable increase.

That is why we need to Audit the counting process, and we need to publish the results along with the names of the system administrators who had the access rights to make a manual override and change the software, change the count, and change the outcome of the election.

Getting to results that reflect truth and accuracy is important. Why? Because that's the American Way. 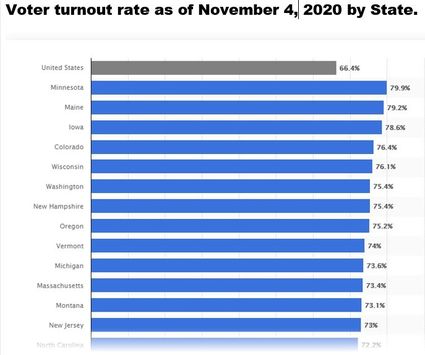 Voter Turnout rate, by state. After an examination of information available on news channels and credible websites, we conclude that the 2020 US Presidential election was rigged.

http://www.ResultsMatter.info is a site that lists the accomplishments of the Trump Administration by logical grouping for easy reading. The list is long.

Editorials from http://www.RESULTSMATTER.INFO are the point of view of the Founders who are business people who work with Computer Systems, Technology, Math, and Auditing. The Founders have MBA and CPA credentials and extensive experience evaluating and implementing computer systems for large organizations. Contact Results Matter with your thoughts at [email protected]