NASA Video shows an elongated object in stationary orbit, as it observes the ISS 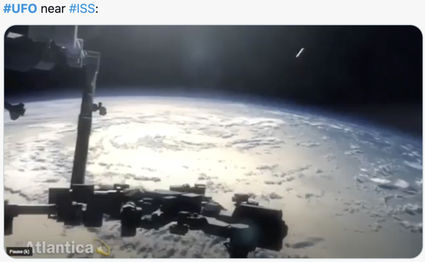 Just beyond the Canada-ARM, a UFO is seen in orbit near the International Space Station.

An unidentified object hovering in space near the International Space Station was live-streamed on NASA TV on Tuesday. The object appeared to be some 10 meters in length and about 2 meters across, and perhaps 3 km from the ISS. It is in the shape of a silver monolith.

Silver monoliths have been sighted in various places on Earth, since November when a silver monolith appeared in Utah's Red Rock Desert. As far as we know, this is the first one found in Earth orbit.

Earth orbit is full of debris from defunct satellites and discarded rocket stages. Such objects, however, typically appear to tumble end over end. This object was stable, hanging in space as it appeared to observe the station.

In Stanley Kubrick's classic film 2001, a Space Odyssey, black monoliths are a theme. But recently, monoliths have appeared outside of science fiction. Monoliths even appear in photos of Mars and one of its moons, Phobos. https://www.smobserved.com/story/2020/12/06/news/nasa-photos-show-utah-monolith-on-mars-martian-moon-phobos/5086.html

NASA astronauts have reported mysterious sightings and possible alien objects before. From Globalnews.ca in August 2020:

Ivan Vagner, a Russian cosmonaut currently orbiting the Earth aboard the International Space Station (ISS), claims to have captured footage of potential UFOs while recording video of the southern lights. 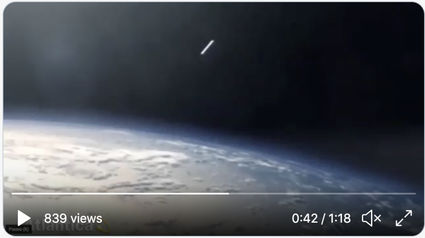 “Space guests, or how I filmed the new time-lapse,” Vagner wrote in a tweet featuring the video on Wednesday morning.

“However, in the video, you will see something else, not only the aurora,” he wrote.

The footage shows the curved edge of the Earth at night, with the green swirl of the aurora moving across its surface and several star pinpoints visible in the background.

“At 9-12 seconds, 5 objects appear flying alongside with the same distance,” Vagner wrote in a follow-up tweet. “What do you think those are? Meteors, satellites or … ?”

These things defy gravity as we know it. But HE knows all things and told us to watch for signs in the heavens. The book of truth is open to anyone interested, confirming verse after verse coming true in Daniel11truth.

Actually, the reality is that the so called UFOs and covid-19 are related. This is the beginning of the end for the world as we know it! Still, something good will come out of it.

Wether or not these monoliths are real or not: we should be concerned about the ability of “someone” with the ability to accomplish such a feat and not be caught, and where and to what end this situation is going to be allowed to continue and possibly develop to something even more bizzare.

The deadly pandemic is of more scientific importance Stan. But you keep chasing these rainbows.