Both of Woods legs were possibly broken in the crash, which required a crowbar to extricate Woods

Golf legend Tiger Woods was seriously injured and taken to the hospital in a car crash near the Genesis Invitational Gold Tournament in Rancho Palos Verdes early Tuesday morninb. The accident involved only Woods' vehicle, which rolled down the side of a hill and appeared to have been crush.

The sheriffs department corrected and said that the jaws of life were not used. Speaking at a press conference, a Sheriff's spokesman said Woods was rescued through the vehicles windshield. They said it was a high-speed single car crash at 7:12 AM at Hawthorne Boulevard and Black horse Road.

Law enforcement sources told the Los Angeles Times that Woods with zooming down a steep stretch of the windy road. He lost control of the SUV and veered over the center divider.

The car rolled multiple times before finally coming to a halt. The accident occurred on the border of Rolling Hills Estate and Rancho Palos Verdes on Hawthorne Blvd.

Woods, 45, the most famous golfer in history, is a sponsor of the annual event. “Tiger Woods was in a single-car accident this morning in California where he suffered multiple leg injuries,” Woods’ agent, Mark Steinberg, said in a statement. “He is currently in surgery and we thank you for your privacy and support.” 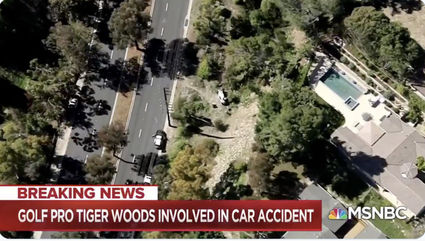 “Woods was in California for a two-day content shoot with Golf Digest/GOLFTV after serving as host for the PGA Tour’s Genesis Invitational over the weekend,” Golf Digest reported. “Pictures surfaced on social media of Woods smiling with Dwayne Wade and David Spade at Rolling Hills Country Club on Monday, but with his movement still restricted from recent back surgery. He did not hit balls or play any holes.”

“A KABC-TV helicopter over the scene of Woods’ accident showed a car on its side with the front end heavily damaged,” the Associated Press reported. “Air bags appeared to be deployed. The wreckage appeared to be just off the side of a road on a hillside.”

On February 23, 2021, Woods was hospitalized in serious but stable condition at Harbor-UCLA Medical Center after a single-car collision and underwent emergency surgery to repair compound fractures in at least one leg in addition a shattered ankle. Sheriff's deputies responding to the near-immediate 911 calls announced that Tiger Woods was wearing his seat belt and that his airbags all seemed to have deployed, potentially sparing Woods from fatal injuries.