How is Las Vegas Grandest, Largest Resort and Casino doing under Covid? The Cosmopolitan remains a credit to the Art Deco grandeur of its designers 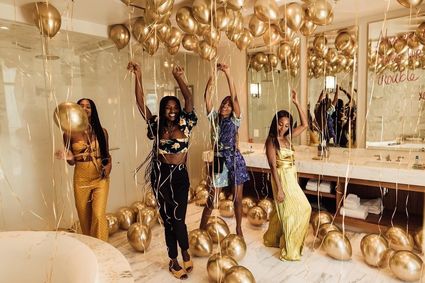 It's party time at the Cosmopolitan, yes, even during Covid.

Some people find locked down LA oppressive. If you need an escape from Gov. Newsom's latest edicts, Las Vegas is a quick 4 or 5 hour drive up the 15 freeway. But what is LV like during the lockdowns?

We found the Cosmopolitan full of life. At 3027 rooms, the Cosmopolitan is Las Vegas' largest resort and the 7th largest on the planet. To gain entry, you do have to wear a mask and keep it on while you're there. It is 2021, so you may expect the staff to test your forehead for fever each time you enter. Because they will.

The Cosmopolitan seems to be a favorite of NBA and NFL athletes. We recognized several famous athletes, each time we dined at the restaurants. Scarpetta, an Italian themed restaurant, and the Blue Ribbon were both full of diners, which is to say they were at the 35% capacity limit currently applied to Las Vegas dining facilities. The upper end restaurants are well worth $250 per couple.

The rooms are a bargain at about $200 on weeknights and $167 on weekdays. For that, you get a view of the mountains and the strip, and also an outdoor balcony.

I won't mince words. Even under Covid and with everyone wearing a mask, we had a truly great time. Vegas is still a City that doesn't sleep. There were people actively gambling at 5 am, and all night long. But this article is about the Cosmopolitan in particular.

The Cosmopolitan is a credit to the Art Deco grandeur of its designers. The C's most recent remodeling was in 2017. How would you describe the room's themes? We asked guest room designer Therese Virserius, principal of Virserius Studio.

"The guestrooms were curated to embody theatre and fantasy, inviting guests to indulge their curiosities as to what the 'right amount of wrong' is," she writes.

Art played a pivotal role, adding whimsical elements. Each space was conceived as a stage where the art introduces mystery characters.

These pieces were created by employing several special techniques; for example, there is a photograph of a profile of a lovely woman that was brought to life using powder delicately printed on recycled corrugated craft paper creating a three-dimensional aspect to the art piece.

"Another piece incorporates blue velvet, a nod to the classic 80's movie of the same name. It is a soft powder print charcoal drawing of a woman exercising with ribbon in a full and free expression of movement," she wrote.

"Guests can follow the lines in an endless loop and imagine themselves similarly. The gallery of images is an exercise in contrasts, face and body, man and dog, shadow and light."

"They invite guests to connect in edgy yet sophisticated ways.  The tattoos are another artistic element, its tones and optical effects of those images was inspired by 19th century French Romantic artist Eugene Delacroix,"

"The woman's face is so beautiful; she could be a photo or a painting, again, it is open to interpretation. The way she is watching you is alluring and inviting; however, in a nod to fantasy, the net covering her face keeps her close, yet she remains unattainable. Finally, the dog with a choker wearing a red wig blowing in the wind will test the depths of guests' imaginations,"  writesTherese Virserius

'"Where The Cosmopolitan is at today is a reinvention of the property that opened its doors more than six years ago," stated Bill McBeath, President and Chief Executive Officer of The Cosmopolitan of Las Vegas. "The past two years have been a transformative process that has reinvigorated gaming, food and beverage and will now include the complete redesign of our hotel rooms – they are bold, innovative and a direct reflection of our alluring brand."

Visitors to Vegas have many choices.  What is special about the Cosmopolitan?  Why choose the Cosmopolitan, in a few words? Situated in the heart of the Las Vegas Strip, The Cosmopolitan of Las Vegas is the place to see and been seen when visiting Las Vegas. Touting a world-class Restaurant Collection, three rooftop pools, the only resort with outdoor terraces with views spanning the entire valley, an accessible art collection, exclusive nightlife and lounge venues and more, The Cosmopolitan has remained the premier modern luxury casino and resort in Las Vegas for a decade. This year, 2021, marks The Cosmopolitan's 10 year anniversary, and to celebrate, guests and locals are welcomed to experience the best the resort has to offer through packages, dining experiences and more: https://www.cosmopolitanlasvegas.com/decade-of-mischief. 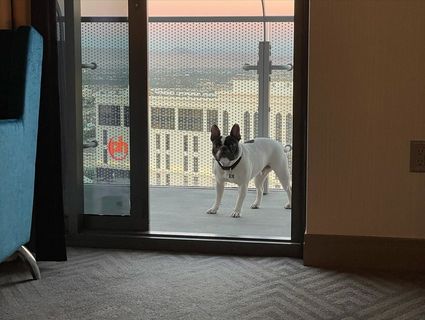 Even the least expensive rooms at the Cosmopolitan have balconies, views, and are large and roomy.

In 2013, the hotel was rated "The Best Hotel in the World" by Gogobot. In 2015, the resort was named to the Condé Nast Traveller Gold List as one of the "Top Hotels in the World".