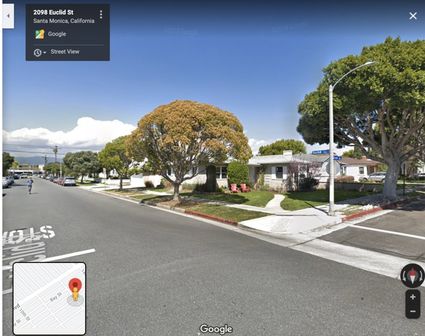 The Santa Monica Police Dept. has appealed for the public's assistance in finding two African American suspects who stabbed a couple in an attempt to snatch a purse. The women was treated at a local hospital with moderate stab wounds. The press release, written by Lt. Rudy Flores, follows.

On Sunday, March 14, 2021 about 3:15 PM, Santa Monica Police Department (SMPD) officers responded to a radio call for service near the 1300 Block of Grant Street. When officers arrived on scene, they located one male and one female victim with moderate injuries as the result of an attempted armed robbery. The Santa Monica Fire Department was dispatched to treat and transport the female victim to a local area hospital where she was treated for moderate stab wounds.

During the follow up investigation, officers learned that the two victims were walking along the sidewalk when approached by two males attempting to snatch the female victim's purse. The following suspect descriptions were provided:

SMPD is seeking the public's assistance in identifying the suspects wanted for this attempted armed robbery and assault with a deadly weapon or for security video that may have captured the incident. Anyone with information pertaining to this incident is strongly encouraged to contact Detective Murphy, [email protected] or (310) 458-8491.