Is it Homeless Advocacy to Allow Mentally Ill People to Live as They Please on the Street? Protestors Want Homeless to Continue Camping Out at Echo Park Lake

As many as 100 people have been camping out at the Echo Lake public park, making it unusable for everyone else 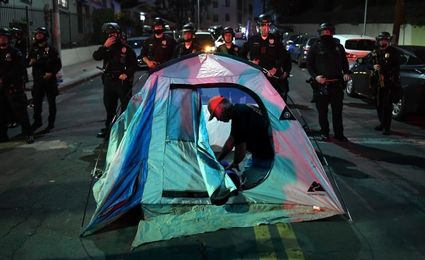 Police and a homeless man in his tent: note how the image slants the imagination toward the plight of the poor man in the tent. Another side of the story is in the photo below, showing the trash generated by these same people, who can't even be bothered to throw out their garbage.

Police were needed to protect construction workers on Wednesday night at Echo Park as over 200 protestors arrived to decry the attempt to clear an estimated four dozen homeless people who'd set up camp on park grounds.

The City of Los Angeles said they need to close the park to conduct about $500,000 in damage to lighting and plumbing and to remove hazardous waste and make public safety improvements. The park has been the site of a tent city commune of up to 100 people at times, reportedly with a vegetable garden, kitchen, and showers. Sanitation has not been viewed as ideal, and there was a "veneer of self-policing," as reported by the LA Times.

City Councilman Mitch O'Farrell told reporters that efforts had been made since January to house the people who'd camped out at the park, with over 120 people moved to Project Roomkey and Project Homekey sites. "Those efforts are ongoing," he said in a statement released by his office.

Homeless advocates, however, protested the way those living at the park were being forced to leave. Zarinah Williams, president of the Echo Park Neighborhood Council told City News Service, that the park was a "free and accessible place for members of this community who need it for solace, leisure or survival." She called the sweep of the homeless from the park "criminalization of our residents."

On Wednesday night, there were some skirmishes of a minor physical nature between homeless advocate protestors and police as workers posted notices of the park's closure and worked to cordon it off. According to the LA Times, some police shoved protestors and protestors threw bottles and other objects at the police. One woman was arrested for failing to disperse and flashing a light in an officer's face.

The conflict, often painted as between the "haves" and the "have nots," is actually a different problem. The "haves" don't have their expensive homes by the lake by simple good fortune. Nearly all of them have worked hard for that home. In the process of buying and maintaining it, the "haves" have investigated and followed all the many, many laws surrounding code compliance, legal rights, and so forth - laws designed to enable people to live in a safe, clean environment in harmony with each other.

Those "have nots" remaining at Echo Park Lake are not following a single one of the laws that every other person is following. They are camping where no one else is allowed to camp. They are setting up kitchens and gardens and bathrooms that do not comply with health codes and that, in many cases, directly conflict with basic health and sanitation. This creates a hazard for everyone in the community, both "haves" and "have nots." Many of those remaining at Echo Park were offered hotel rooms but chose not to accept them. They did not want the restrictions they had heard would be part of the bargain, such as searches and curfews.

In other words, the "have nots" in this particular situation, as in so many other so-called "homeless" situations, have either drug addiction or mental health problems, or both. Allowing them to live a feral lifestyle on the street is no more humane than allowing a dog to live a feral lifestyle on the street. And the problem is not Ronald Reagan letting all the mentally ill out of the psychiatric hospitals. That happened almost 40 years ago. The California legislature has had plenty of time to redirect its bountiful social welfare funding to mental health institutions and to create laws that make it easier to commit people involuntarily who are clearly unable to take care of themselves.

The problem is nobody has the guts to pass such laws. It's really quite curious. Our legislature has no problem passing laws that allow people to kill themselves or even to direct others to kill them via "assisted suicide" (also known as murder). Why should it be so difficult to pass laws that allow others to live? 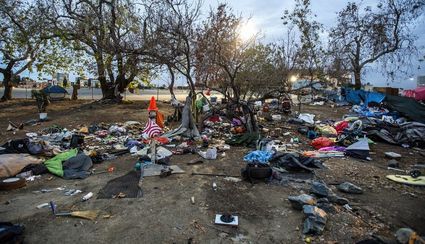 Trash from the encampments at Echo Park

Could it be that the "homeless," so conveniently named when they are actually the "mentally ill vagrant," are useful to some of our politicians? They create a need and an urgency for more housing and for upzoning and for directing funds to affordable housing. Of course none of the mentally ill camped out at Echo Park, or on any of the other streets in Los Angeles, could qualify for even the lowest income level of affordable housing. None of them have been unsheltered because there simply isn't enough housing stock in the region. It wouldn't matter how much housing stock there were, none of them would be in it. Instead, they give credence to a "housing crisis," and they give apparent legitimacy to the giant grab for power over the state's land and the money to be made therewith.