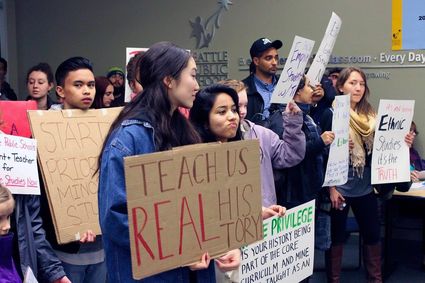 It is unclear what these students think "real history" is

Last fall, Governor Newsom vetoed AB 331, which would have made an Ethnic Studies course a high school graduation requirement. His objection to the law was the model curriculum on which it was based. Now, the Ethnic Studies requirement may come before the state legislature again as the State Board of Education (SBE) unanimously passed a revision of the model curriculum. The issue has now passed to the Assembly Education Committee.

Although the SBE claims they made 240 changes to the earlier, rejected curriculum based on 57,000 public comments, the "new" curriculum does not look very different, and the underlying thesis remains very clearly the same. That thesis is Critical Race Theory, the proposal that all of human history and experience can be described in terms of the struggle between oppressed and oppressor.

The purpose of the curriculum is self-described as "grappling with the various power structures and forms of oppression that continue to have social, emotional, cultural, economic, and political impacts." The course will also "critique empire-building in history and its relationship to white supremacy, racism and other forms of power and oppression." In other words, the course will cherry pick through U.S. history for events to prove that white people and Western culture are awful. 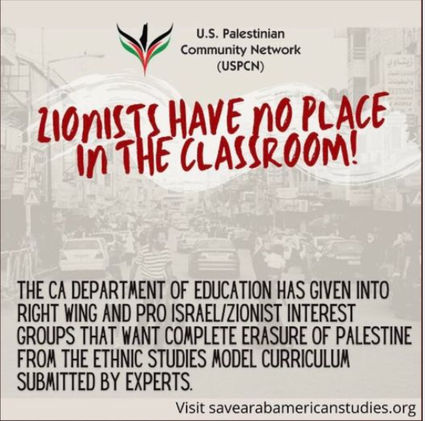 There is a good reason this curriculum took so many years to develop and why it should never see the inside of a classroom. The whole idea promotes hatred.

The ethnic studies course will focus on four groups: African American, Chicana/o/x and Latina/o/x, Native American, and Asian American and Pacific Islanders. Sample lessons do exist for other, smaller groups, including Jews. While some Jewish organizations have been satisfied with the changes made to the original curriculum, others are still concerned - and rightly so. The lessons about anti-Semitism are a cringe-worthy, carefully curated attempt to box Jews into a "victim" mold - which is apparently the only way a group (or a person in a group) can be made morally acceptable. Learning about American Jewish experience outside of the victim mold is not attempted because no ethnicity has any value in this curriculum unless the ethnicity is in the process of being oppressed. And Jews can apparently do double-duty in this regard, acting also as oppressor. Another lesson asks students to identify "When, how, and which Jews have experienced racial privilege?"

Since any reasonable adult would conclude that it would be divisive and harmful to teach children of any age that they are divided by identity and, moreover, some identities are largely oppressors and others are largely oppressed by them, the model curriculum makes sure to tell us that "division is antithetical to ethnic studies." That's right - after spending a semester describing how terrible different groups are to each other, the students will all end up loving each other. Bridges will be built. Harmony and self-esteem will ensue.

Far be it from our public school system to do something so base and morally repugnant as to "resort to the cliché about how we are all basically alike," as the model curriculum sneers.

Maybe the young people will rebel against it; one can hope.