After we broke the story of how organized crime operates illegal vendors on the Santa Monica Pier, officials begin to crack down on the illegal activity. 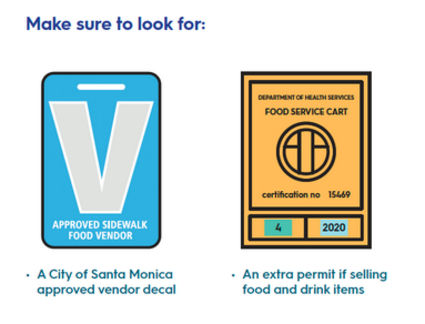 Legal street vendors have these stickers on their carts

April 21, 2021 A fight that broke out April 11 in the pier's north parking lot among six members of the Murcia family, ending in their arrests, highlighted the ongoing and unchecked activity of the allegedly criminal Murcia family regarding the vendors. According to a highly placed city official, the Murcia family brings in dozens of vendors every day to Santa Monica. None of these vendors have city permits or county or state licenses to operate. Instead of licenses, they pay protection money to the Murcia crime family, who have been involved in at least two fights since September regarding disputes over vendor territory and/or payment.

Today, the Deputy City Manager, Anuj Gupta, issued a statement regarding a change in the way the city will address the unpermitted vendors. In addition to their participation in organized crime, they present a fire hazard with their butane tanks and a health hazard with zero health code compliance regarding food preparation. From now on, the Code Enforcement Officers will be backed up by the Santa Monica Police. This support had not been provided previously, resulting in a refusal by the CEOs to go to the pier, where they had been threatened and harassed by Murcia family members.

In addition, the city is going to enforce existing parking restrictions on large vehicles, so the big white-paneled trucks that bring the vendors (and where they hide during enforcement activity) are not allowed to park in Lot 1, north of the pier.

Stay-away orders will be enforced against the six Murcia family members who were arrested for the fight on April 11.

In order to provide long-term solutions, the city is actively pursuing an amendment to SB 946, the state law that decriminalized street vending and which prohibits the police from arresting or otherwise establishing true enforcement of local ordinances that require permits.

The city wants public awareness that vending carts that do not bear "Approved Sidewalk Food Vendor" and "Department of Health Services Food Service Cart" stickers are unpermitted and may present a hazard to your health and/or be a danger to the safety of the pier structure and environment. If you want to report illegal vending activity, call 310-458-8495.

The city's statement is below:

The Santa Monica Pier is an iconic destination where you can take in views of the Pacific, enjoy lunch al fresco, or hop on the Ferris wheel. With all there is to see and do, it's no wonder that the Pier is one of Southern California's most sought-after destinations for locals and visitors.

Following the passage of SB 946 in 2018, which decriminalized sidewalk vending in California, the City of Santa Monica created a Sidewalk Vending Program in April 2019 designed to provide a safe and legal pathway to licensed vending in Santa Monica. The basis of the program is to balance public health and safety with expanding economic opportunities for micro-entrepreneurs who obtain a permit to vend.

All vendors need a City of Santa Monica business license and vending permit to sell any items in the City, and vendors selling food must also obtain and display a Los Angeles County Department of Public Health permit. The four-step process to secure a low-cost license and permit are outlined here.

As part of the City's program, sidewalk vending is restricted in certain congested, high-traffic areas to protect public safety. This includes on and around the Pier, where all vending is prohibited except the City's existing licensed vendor cart program, and the beach, Third Street Promenade, and Palisades Park, where stationary vending is not permitted.

The City recognizes there are vendors on the Pier and along the beach area who are operating outside of the permit system and counter to location restrictions. City teams are actively engaged in enforcement and education efforts to protect the health and safety of our community and beach visitors. Here is a snapshot of these efforts: 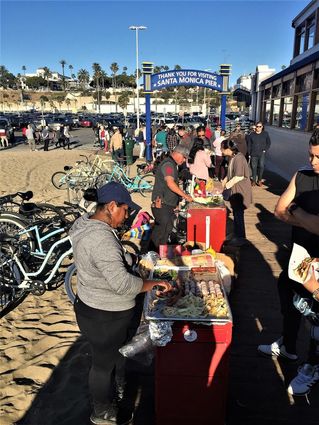 Street vendors at the pier in September, 2019

Remember, if you purchase items from a vendor, be sure they have an official vending permit issued by the City of Santa Monica as well as an LA County Public Health Permit for food items. Look for these permit decals on the vendors cart or badge. Do not purchase items from vendors in areas around the Pier where vending is prohibited.

Always wear a mask and practice physical distancing when visiting the Pier.