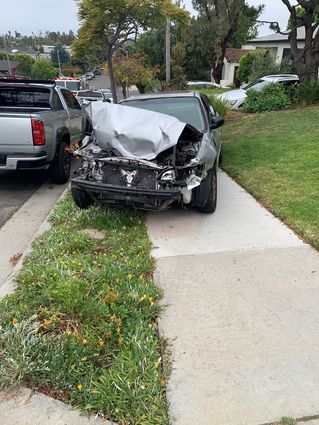 Suspects' automobile after their expensive joyride

On Tuesday morning, when most people were going back to work after the Memorial Day weekend, three youths, either drunk or on Xanax, crashed their Honda into a series of parked cars in the Ocean Park neighborhood and landed on a homeowner's lawn. The one female of the trio tried to make off with a sawed-off rifle. Police arrested and booked all three, including one male passenger whose only offense was public intoxication - and hanging out with the wrong crowd. Below is the official press release: 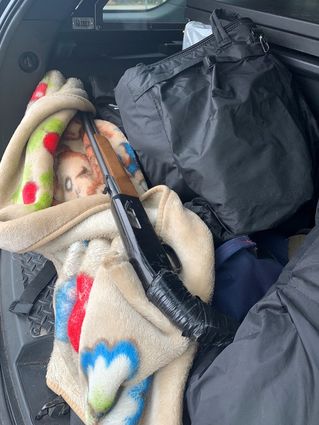 Weapon the female suspect tried to carry off

Santa Monica, CA –On June 1, 2021 at approximately 8:25 am, the Office Of Emergency Management (OEM) Dispatch received a call from a citizen regarding a reckless silver Honda Accord being driven by a male believed to be under the influence(DUI). The reporting party(RP)told the dispatcher that the Honda had hit several parked vehicles, in both the Los Angeles and Santa Monica areas, and had now collided with a parked car and ended up in the front lawn of a home in the 1100 block of Cedar St. Upon arrival,officers immediately detained the driver and a male passenger. They met with a witness, who told them a female passenger of the Honda walked away carrying a large item wrapped in a blanket. Officers located the female, later identified as Yaylin Lopez, a 19-year-old female of Van Nuys, a short distance away. Lopez was in possession of a sawed-off .22 caliber rifle and several Xanax pills. The driver of the vehicle, Jose Enrique Bueno, a 20-year-oldmale of Huntington Park, and passenger, Fernando Vazquez, an 18-year-male of Los Angeles, both showed obvious signs of intoxication.All three subjects were taken into custody. Lopez was booked at the Santa Monica Jail for 25400(A)(2) PC –Carrying a Concealed Firearm and 11375(B)(2) H&S -Possession of Benzodiazepine Drugs without a Prescription. The driver, Bueno, was booked for 23153(F) VC –Felony DUI Drugs. Vazquez was booked for 647(F) –Public Intoxication –Drugs. Anyone with any additional information pertaining to this incident or subjects is strongly encouraged to contact the Criminal Investigations Divisionat310-458-8451 or the Santa Monica Department's Watch Commander (24 hours) at 310-458-8427