Will Democrat Senators want to expend political capital on a not very important position? 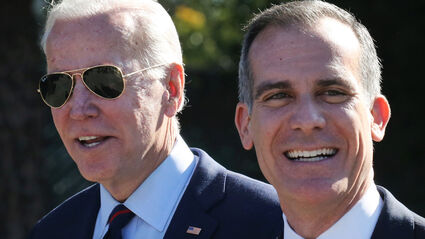 The Los Angeles Times has posted an editorial criticizing Los Angeles Mayor Eric Garcetti, for his willingness to resign as Mayor of Los Angeles and accept the Biden Administration's nomination to be Ambassador to India.

"Mayor Eric Garcetti's willingness to abandon his office in L.A. is a sign of the city's civic inadequacies," writes the editorial board in the Los Angeles Times website. https://www.latimes.com/opinion/story/2021-07-09/eric-garcetti-ambassadorship-los-angeles-mayor

The opinion piece goes on to sound like a jilted lover. "Is it something about Los Angeles that led Mayor Eric Garcetti to accept President Biden's nomination as ambassador to India? Something flawed in the DNA of the city's civic organism? Or is Garcetti's exit just a strategic career move, not a rueful comment on the difficulty of leading this wayward city? Other ambitious citymakers have turned away from Los Angeles too, frustrated by an unaccountable apparatus of city government designed to work behind a mask of obscurity."

As for critics on the political right, they are looking forward to a contentious set of Senate confirmation hearings. "Garcetti has been Mr. Defund the Police. Will Democrat Senators want to expend political capital on a not very important position, but supporting this man?" asks John Phillips on KABC.

Should Garcetti be confirmed, which is rather likely, there would either be a special election to fill the Mayor's position, or the 15 member LA City Council could appoint someone. City councilmembers Nury Martinez and Joe Buscaino and LA City Attorney Mark Feuer have all expressed interest in the Mayor's office. Garcetti's term ends in November 2022.

Los Angeles like other major cities, faces major problems with Covid, homelessness and crime. The theme of the editorial is that it seems like a bad time for LA mayor Garcetti to exit his office.