There's a Good Reason the Norway Women's Beach Handball Uniforms Are Different. Here It Is:

This is an exhibition sport striving for world attention. And who wants to see the guys dressed that way, anyway? 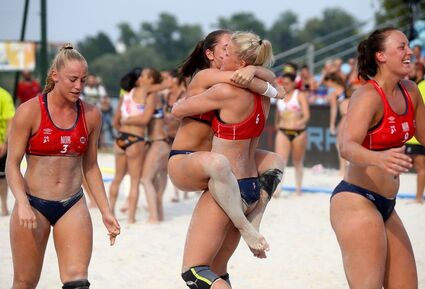 Norwegian national beach handball team in a uniform that meets the requirements of the European Federation.

It's the summer, nothing's on TV and the top story in the world are the bikini bottoms worn by the Norway Women's Beach Handball Team. Personally, I'll take this over any Covid related story.

Beach Handball has not yet made the Olympics permanently. At the 2020 games, it is an exhibition sport striving for world attention. The ladies look just awesome dressed that way. Sorry, but who really wants to see the guys dressed that way, anyway?

"Norway's Women's Beach handball team just took a stand for women across the world" tweets Rosa Lei Steinard, @Lensman23 "by refusing to play in bikini bottoms, which is mandated by the sport's sexist, outdated rules. This is the Norwegian Men and Women's team? See the difference?"

Norway Women's Beach Handball Team were sanctioned July 22, by the Disciplinary Committee of the European Handball Federation (EHF) for wearing shorts instead of bikini bottoms in their bronze-medal match loss to Spain at the European Beach Handball Championship in Bulgaria on Sunday. They were made to pay around $177 each, or $1550 in total. Lady Gaga and other celebs offered to pay the entire fine.

"Ahead of the tournament, Norway asked the EHF for permission to play in shorts but were told that breaches of the rules were punishable by fines. They complied, until their last match," CBS News reported.

Norwegian politician Lena Westgaard-Halle tweeted, "Can you please stop the forced bikini nonsense at your beach handball games? It is embarrassing, disgraceful and sexist. You are ruining both the sport and your own reputation." 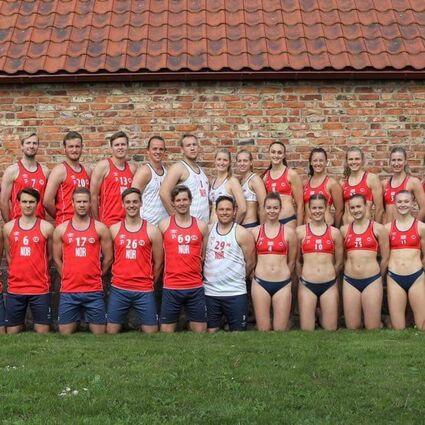 Martine Welfler, one of the Norwegian players stated, "I don't see why we can't play in shorts," The New York Times reported. "With so much body shaming and stuff like that these days, you should be able to wear a little bit more when you play." Players Tonya Lurstaad and Julia Bird, appearing on "Lorraine," said, "We wanted to make a statement and change the regulation."

"Norway's beach handball players were each fined 150 euros for wearing shorts rather than the required bikini bottoms. A spokeswoman for the International Handball Federation said she didn't know the reason for the rule. So men can wear shorts but women are fined for it?" Tweeted @sarahdata

Abid Raja, Norway's Minister for Culture and Sports, called the fine "completely ridiculous," the Daily Mail noted, adding, "What a change of attitude is needed in the macho and conservative international world of sport." Kare Geir Lio, the head of the Norwegian Handball Federation, said Norway had complained about the bikini bottom requirement since 2006, adding, "Nothing has happened."