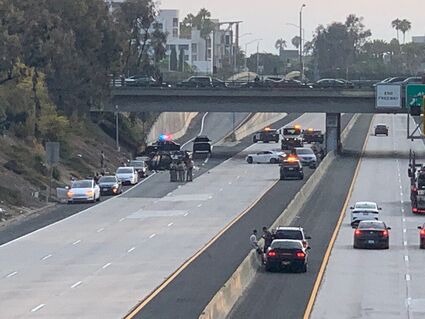 A fatality collision at the East end of the McClure Tunnel closed the 10 freeway for a few hours Saturday afternoon, the Santa Monica Fire Department said in a press release.

Four people were injured and one was pronounced dead at the scene. 27 Fire fighters in addition to Santa Monica Police and CHP units responded. The Freeway was closed for five hours Eastbound past the McClure Tunnel.

On Friday August 14th, 2021 at 5:46 p.m. Santa Monica Firefighters responded to a report of a multiple vehicle traffic collision on the eastbound Interstate 10 Freeway at the Lincoln Boulevard overpass. Upon arrival, Firefighters found nine (9) vehicles involved with one (1) overturned. After rapidly assessing the scene and triaging all parties involved, it was determined there were four (4) patients; tragically one (1) was pronounced dead at the scene, one (1) was critically injured and transported to a local trauma center, one (1) patient with minor injuries was transported to a local hospital, and the fourth patient who suffered minor injuries was treated and released at scene.

A total of 27 Firefighters and Paramedics along with our partners at Santa Monica Police, California Highway Patrol (CHP), and McCormick Ambulance worked to stabilize the incident scene, provide care to the injured and transportation to the hospital. The cause of the incident is under investigation by the CHP.