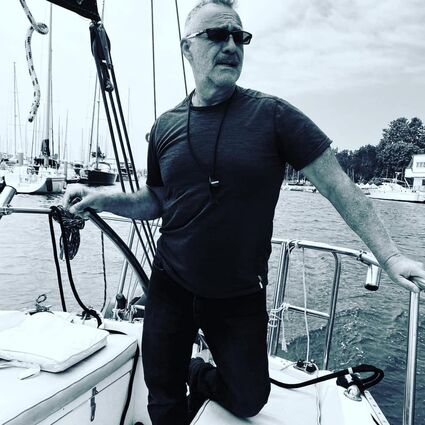 On my first attempt to sail outside the Marina del Rey harbor, I saved a very young woman in the middle of the ocean. I am still shaking about the horror she faced for 12 hours in darkness in the ocean with no life jacket or anything whatsoever.

I am not religious nor that spiritual but one must wonder about this universe! Consider these facts:

1: I acquired this boat just about a month or so ago and learned sailing just a few weeks ago! Most sailors with decades or over half the century of sailing never been in this situation.

2: Last week I took American Sailing Association (ASA) 101 and 103 courses from Blue Pacific Yachting of Marina Del Rey (basic sailing course on land and sea that also shows how to rescue crew overboard). Also on my own initiative, I got my CA boater's license as well online. Unbelievable timing.

3: Last two weeks, I ordered from Amazon two pieces of rescue equipment and we ended up needing both for the effective rescue! It's much more complex than you might think. No - no Captain jumps in water in such situations unless the person has sunk below water and is drowning.

4: Before departing the port for Paradise Cove destination in Malibu coast, I spent roughly an hour training my 3 guests (non-sailors) on safety issues and ON RESCUE plan if any of us fall into the wate.! I told them that such a situation will not occur in years but you never know. Now, we know! The crew did not go overboard - someone else was found in water!

How did she end up in the middle of the ocean? According to MDR Harbor Sheriff deputies (as well as according to the LA County Fire Department rescue boat captain Captain Matt Rhodes), she went swimming all alone on Saturday near midnight (shockingly many young people skinny dip late at night, I was told). She could not make it back to the land and drifted away until 12 hours later when we found her a few miles offshore. She is a true fighter, who defied the odds and survived in the cold water.

We noticed her thanks to a pod of dolphins (our eyes were following the dolphins just a minute or two before spotting the lady) - before noon on Sunday Sept 26th (12 hours has passed since she entered the water). She had almost zero muscle capability to tread in water or to use my boat's ladder to come up (we had to pull her up with serious difficulty).

According to the sheriff's deputy, when I asked why no one who would have seen her clothes on the beach called the police, he said many people don't think twice or assume anything. They just walk by and continue with their walks/life!!! Unbelievable!

I had to pass her twice. First, I asked one of the guests to point to the survivor's location with her finger at ALL times so I would know the location regardless of the waves; then a really fast approach forward so we could reach her vicinity within seconds and asked my guest #1 to throw the square-shape life-saver towards the survivor to hold on to; Second, I went forward for a distance (about 4 boat's length) and performed an 8 (infinity sign) approach around the survivor so the survivor would get between the wind and the boat (did not want the boat to crash into her skull/face). Third, I asked my 2nd guest to throw an orange 70 ft rope (Thanks Amazon) so the survivor can let go of the first device (or keep both) and grab the rope for us to pull her gently towards the boat ( she let go of the first device - if anyone sees my orange square life-saver anywhere in the Pacific Ocean, it's mine - save it and bring it to me lol!); then I asked my 3rd guest to untie the ropes and release the ladder in the back of the boat into the ocean for the final stage of rescue; then when the survivor was next to the center of the boat in water, I turned off the outboard engine (so the engine blade wouldn't cut her body) when we pulled her towards the ladder, and then it took two strong men (thanks Gold's Gym Venice Beach) to pull her up (she had zero muscle function to help us) and 2 other guests (thanks ladies) went to saloon downstairs and got dry towels, water, and a thick blanket. 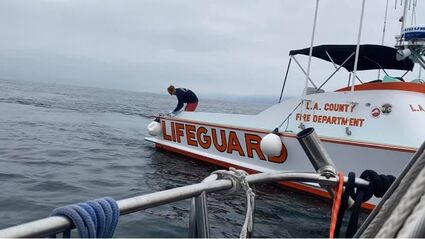 At this point, I sent an emergency "Mayday" transmission for the US Coast Guard (the night before I made sure the VHF radio was fully charged and I learned how to use it) (Special thanks to LA County Rescue Boat Captain Matt Rhodes and his partner - you guys are heroes). Many sailors who have sailed for decades and the rescue boat operators told me that they never heard of such a scenario or seen it - and I got myself in this situation in my first little voyage from MDR to Malibu (15 nautical miles at best)!! Go figure! There must be a meaning behind all the above happenings to align perfectly for this young woman to survive and to live for decades to come hopefully!

The survivor is in stable condition and is well. Happy ending (Thank you UCLA Ronald Reagan Hospital). The identity of the survivor will remain anonymous for obvious reasons...

p.s. The ocean is very powerful no matter how good a swimmer you are! Only swim in daylight in front of lifeguards!

p.s.s. The survivor DEFIED the odds so the sailing vessel DEFIANT was CHOSEN to find her - over and out!