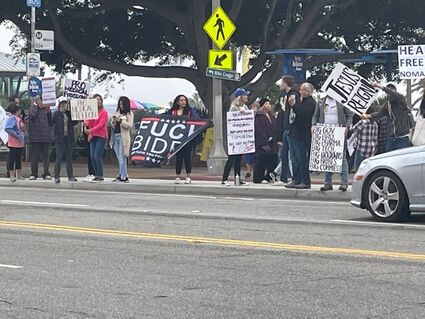 11/4/21- - Yesterday afternoon, a rally was held in Palisades Park in Santa Monica as part of a "Worldwide Walkout" to protest vaccine mandates. According to a participant, there were between 250-350 people attending the rally, which began at 1:00 pm and ended with a march down to the Pacific Coast Highway at 4:00 pm. People holding signs opposing vaccine mandates lined Ocean Avenue for an estimated 200 feet.

Several speakers addressed the crowd, including Reinette Senum, former mayor of Nevada City and Commissioner Diane Miller of Santa Monica's Commission on the Status of Women. According to an eyewitness, the event was well-organized and very professional. The speakers were "on fire" and "high-end inspirational." Admittedly, some of the people who had bullhorns were saying "intelligent but a little hostile" words about those who listened blindly to government authorities. However, no one opposed all vaccines, just those related to Covid-19

In addition to the speakers, petitions were passed around protesting vaccine mandates.

The people attending the event were reportedly of all ages, genders, and ethnicities. "Not just hippy-type people," said the eyewitness. Many had never attended a rally previously. Most were not from Santa Monica, she believed, and some had come from far away. "There was a lot of camaraderie."

The response from people driving by was "different from in the past," said the eyewitness. Many people honked and gave a thumbs up. The eyewitness said nobody who drove by giving a negative response to the messages on the signs.

Street vendors took advantage of the crowd to set up their carts and sell food. 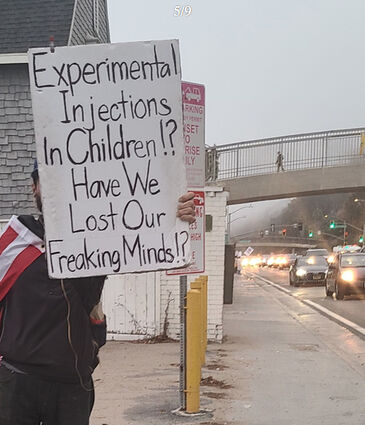 Protestors ended up beside the Pacific Coast Highway

There were no altercations or particularly negative interactions with passersby. About half a dozen policemen monitored the event from a distance, but did not interact with the crowd. "They didn't do anything and we didn't do anything," said the eyewitness.

However, John Alle, local property owner, said he saw the police "in full force" blocking one lane of the California Incline, apparently when the protestors marched down to cross the Pacific Coast Highway via the bridge. "And they will not patrol our Downtown and Promenade," Alle added.

It is hard to publicize protected-speech protests regarding vaccines and Covid-19 because most social media sites will block posts regarding such events. Knowledge of rallies regarding Covid-19 and vaccines can only happen via word-of-mouth.

According to the eyewitness, "I saw we weren't alone because of the response from people driving by."

There's lots of successful treatments for covid, if you even need them. Now pfizer has a pill which reduces hospitalization and deaths by 90%. So why the draconian mandates? The obvious answer is money. Follow it and you will know.