John Korir of Kenya won the race in 2 hours, 12 minutes 47 secs. Natasha Cockram of Wales won the women's in 2 hours, 33 minutes and 17 seconds 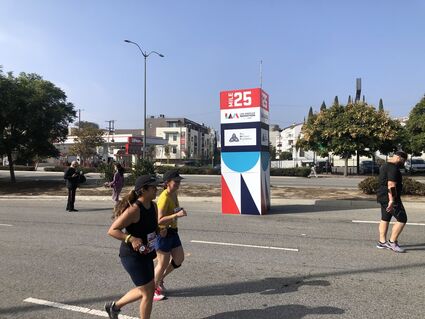 The 25 mile mark of the LA Marathon, near the Mormon Temple at Overland and Santa Monica Blvd.

The 36th running of the Los Angeles Marathon got off the ground at 7 am Sunday morning. Wheelchair contestants were allowed to start before 15,000 runners. The number of runners was greatly limited over the March 2020 event, when over 25,000 competed.

John Korir of Kenya won the race in 2 hours, 12 minutes and 47 seconds. Natasha Cockram of Wales is the new women's champion, finishing in 2 hours, 33 minutes and 17 seconds

The 2021 edition of the race was postponed to November 7th due to the coronavirus pandemic, with all registrants given the option of running the race virtually or transferring their entry to 2022, 2023, or 2024 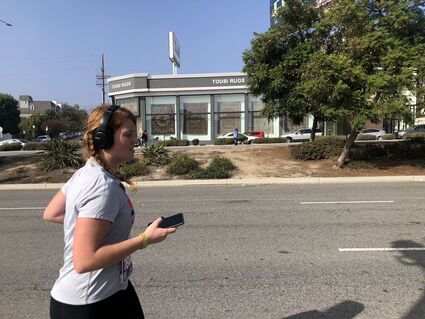 The 25 mile mark of the LA Marathon, near the Mormon Temple at Overland and Santa Monica Blvd.

But unlike last time, the marathon's finish line won't be at the Santa Monica Pier. Instead, participants will wind up doing their finishing kicks in Century City. The change was said to be more about money and less about Covid 19, which delayed this years race.

Some onramp closures could last as long as 5 p.m.

Making it tougher to get around are additional freeway closures in the downtown L.A. area starting at 10 p.m. tonight lasting until Sunday at 3 p.m. due to ongoing construction at the 6th Street Bridge Replacement Project in Boyle Heights.