Vons on the corner of Lincoln and Broadway again the subject of a crime investigation. 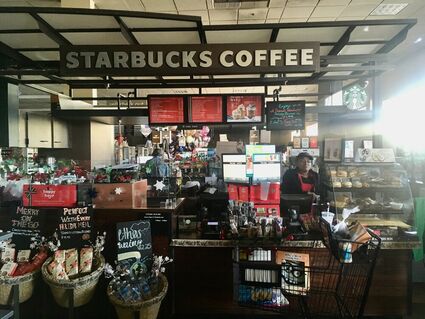 The Starbucks inside the Vons on Lincoln. Employee pictured was not involved in this incident.

11.9.21: Vons on the corner of Lincoln and Broadway was the scene of an incident at 10:30 pm Monday night. A male customer refused to put on a mask. When he began to fight with a security guard, throwing said Vons employee on the conveyer belt, the guard apparently stabbed the unruly customer with a knife.

When a customer went off on the store for being told to wear a mask, and threw an employee onto the conveyer belt. The customer ended up stabbed somehow after a confrontation with the employee.

Police are reviewing video of the incident. They say there are no charges filed yet, but that they are considering the possibility. The SMPD released the following statement:

Santa Monica, CA – On November 8th, at about 10:35 PM, a call was received of a stabbing at the Vons Market (710 Broadway). The reporting party, a security guard at the location, told the operator that he got into a fight with a customer and stabbed him in self-defense.

Santa Monica Police Department (SMPD) Officers arrived on scene, located the male (customer) in front of the market with multiple stab wounds and immediately began providing first aid until the Santa Monica Fire Department arrived, then subsequently transported him to a local hospital.

SMPD Officers interviewed witnesses along with the security guard, who fully cooperated during the investigation. Officers learned that the customer entered the store and started to cause a scene. The customer was also not wearing a face mask. When staff approached him, he became belligerent and assaulted a staff member. The security guard intervened and attempted to escort the customer out of the location. A struggle and then fight ensued between the two. At one point during the fight, the security officer pulled out a small pocket-knife and stabbed the customer multiple times. At the conclusion of the fight, the customer exited the main entrance where he was located by officers.

The customer is recovering at a local hospital and has been listed as stable. At the hospital, he refused to identify himself or provide any statements of the incidents. At this time, no arrests have been made. This investigation is ongoing.

Anyone with additional information regarding this incident is strongly encouraged to contact SMPD’s Criminal Investigations Division at310-458-8451or the Watch Commander (24 hours) at310-458- 8427.