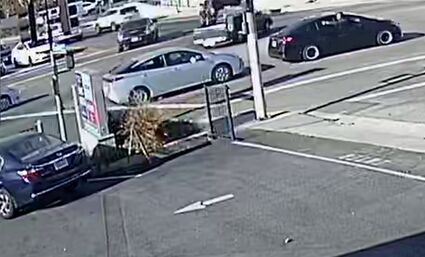 11/18 - Police are asking for witnesses to come forward regarding an armed robbery that occurred Monday, November 15 at around 2:00 pm.

A man had parked his car in the 2600 block of 34th Street, near Pearl, when a black sedan stopped in front of him. A white or Hispanic male got out of the front passenger seat of the black sedan and walked to the victim's vehicle. Wearing black bandana over the lower half of his face, he pulled out a handgun and demanded the victim's cell phone and wallet. Once he received these items, he got back into the black car, which drove away.

The victim decided to follow the suspects in his car. The suspects understood they were being followed and, while they were traveling eastbound on Pico Boulevard, the passenger leaned out his window and fired multiple shots at the following car.

The victim nevertheless continued following the suspect car until it entered the 10 Freeway at the Centinela on-ramp.

Photos from surveillance cameras at nearby businesses and a residence are provided to help the public in identifying the suspects, one of which can be seen leaning out of the passenger side window to shoot at the victim. 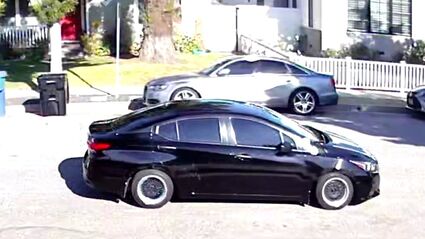 Lieutenant Rudy Flores of the Santa Monica Police Department would like to remind the community "that we do not encourage anyone to endanger themselves further by trying to follow or chase a suspect involved in a serious crime. We ask that they focus on being a good witness and try to obtain a detailed description of the vehicle and parties involved then immediately contacting the police for assistance."

Suspect 1: Passenger - Male White or Hispanic, late twenties, straight shoulder-length brown hair, brown or grey eyes, wearing a hoodie and a black bandana that covered the lower half of his face

Anyone with any information pertaining to this incident, the suspect or vehicle involved, is strongly encouraged to contact Detective Tavera at 310-458-2256 or the Watch Commander (24 hours) at 310-458-8426.