Water Main Breaches are Skyrocketing as Aging Infrastructure Gives In to Strain.

Aging Underground Infrastructure: No One Sees It, and Few Discuss the Problem. 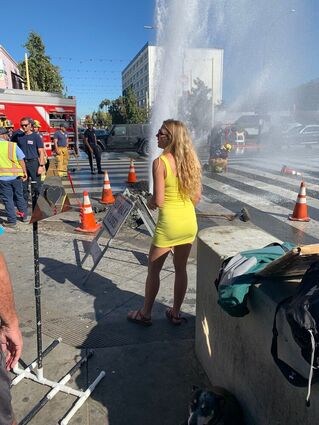 Shahraree stops to watch water gush 80 feet into the air in front of the Santa Monica Pier, Friday at noon Nov. 12, 2021

Three water main breaks last month were a reminder that Los Angeles County infrastructure is aging and often needs to be upgraded or repaired.

The first break, in Venice, occurred around 2 a.m. Tuesday Nov. 2, 2021, according to the LADWP spokesperson, when a six inch cast iron pipe sprung a leak.

The water in that area was shut off around 3 a.m. At least 12 services in the area are impacted by the leak and resulting lack of water, including the administration building at a nearby school.

A second break the afternoon of November 12th, shot water 100 feet into the sky right in front of the Santa Monica Pier Arch, on Colorado Blvd and Ocean avenue.

Crowds of tourists and local residents watched as firemen attempted to find the shutoff valve.

"Amazing," muttered Shahrahree, as she waited to meet a friend near the Santa Monica Pier Arch. The Pier was built before 1920. Some of the infrastructure that serves the Pier still dates from that era. 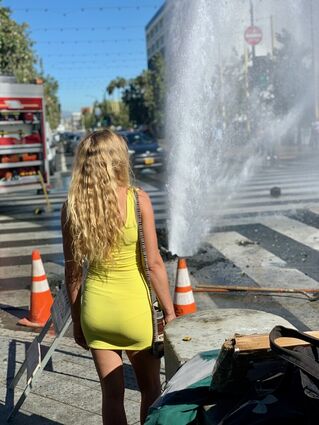 Shahraree stops to watch water gush 80 feet into the air in front of the Santa Monica Pier, Friday at noon Nov. 12, 2021

"Fire Mains do break and plumbing needs repair periodically," said City Councilmember Phil Brock. "However, as a city it is important that our infrastructure is kept in top shape. From electricity to sewers to water mains and more it has to be a top priority of our city government. Infrastructure comes before adding more density to Santa Monica."

It's one of three leaks that particular water main has sprung over the past five years, according to a LADWP spokesperson.

The broken pipe sent water flooding down Cahuenga Boulevard, in a stream flowing from Oakshire Drive to Lankershim near Universal Studios. The incident left 41 LADWP customers without service overnight, and closed Cahuenga, a major thoroughfare.