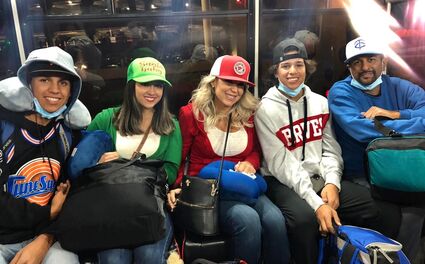 Oblivious or unafraid, many travelers are maintaining their plans amid the sharpest increase in Covid cases in the region

December 24, 2021 - With every day setting a new record in the rate of new cases of Covid-19 in Los Angeles County, health officials today announced 9,988 new positive cases. 801 individuals are in the hospital. They did not say how many of the new cases today have been identified as the Omicron variant, but two days ago, county health officials claimed 162 Omicron cases out of a total of 6,509.

The number of new Covid cases in the county had been holding fairly steady in the 3,000-plus range until Wednesday, when that number jumped to 6,509 new cases. On Thursday, a second jump put the new case number at 8,633. For perspective, during the large surge in cases last winter, it took from November 18 (3,944 new daily cases) to December 9 (9,243 new daily cases), three weeks, to move a similar amount as has presently occurred in three days.

Health officials expressed confusing information in their press release on Wednesday. While claiming only 162 new Omicron cases (out of a total of 6,509), they nevertheless blamed the sharp increase in daily cases on Omicron. "This steep increase, one of the steepest rises we have ever seen over the course of the pandemic, reflects the increased circulation of Omicron and the associated rapid acceleration of transmission associated with this variant." Either there were actually more than 162 Omicron cases, or Omicron cannot be blamed for "increased circulation" of a variant that is not Omicron - the 6,347 other cases recorded on Wednesday.

Today, there are 801 people hospitalized with Covid 19 and there were 21 deaths reported yesterday. For perspective, during last winter's surge, which occurred before any large-scale vaccination and with a different variant, by the time there were 9,243 cases on December 9, there were 3,299 in the hospital and 75 daily deaths reported. It is possible that because the case numbers were slowly rising over a longer period of time, more people had time to get sick enough to end up in the hospital. It is too soon to tell if this current surge, occurring now that 67% of the population is vaccinated, will lead to the same rate of hospitalization. 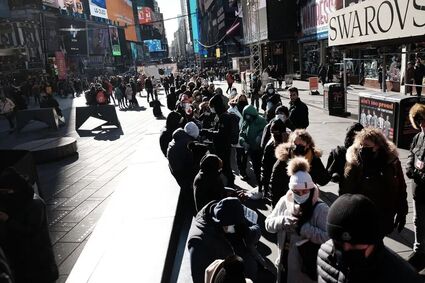 Dr. Barbara Ferrer, PhD, MPH, MEd, Director of Public Health, believes there could be over 20,000 daily new cases of Covid by the end of the year, in other words, in one week. Her advice was to get a booster shot and to "upgrade" your mask to a medical-grade, surgical, or KN95. "According to public health data, between December 5-11th, fully vaccinated people with boosters were 20 times more protected from infection versus only 4 times more protected for fully vaccinated without boosters, as compared to unvaccinated people," Ferrer stated in her press release. LACDPH has not released any raw data, however, to prove this contention, which is in contradiction to data they did release for the time period between November 15-27, which showed 64.9% of new cases occurring among the vaccinated, which comprised roughly 67% of the population - a near alignment that indicated very little protection from infection from the vaccine. However, vaccines did lower the case fatality rate over no-vaccines, at .63% versus 1.84%.

The first Omicron case was reported in Los Angeles County on December 2.