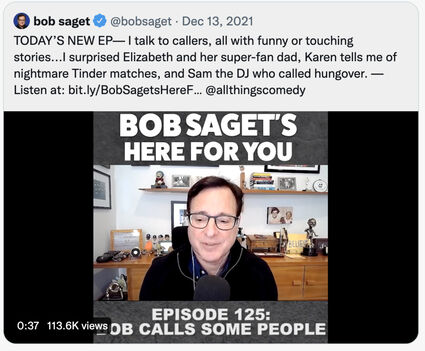 Actor Bob Saget was found dead in a hotel room in Orlando on Sunday, according to authorities. The cause of death is under investigation, but no foul play is suspected. Twitter wants to know why they won't release the cause of death. The twitter mob suspects they don't want us to know his death was caused by his recent vaccination.

"Earlier today, deputies were called to the Ritz-Carlton Orlando, Grande Lakes for a call about an unresponsive man in a hotel room. The man was identified as Robert Saget & pronounced deceased on scene. Detectives found no signs of foul play or drug use in this case," wrote the Orange County Sheriff. 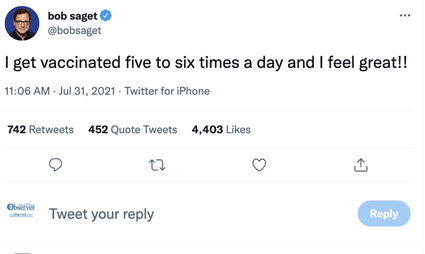 Saget had tweeted on December 13th about receiving a Covid booster shot. The tweet is at https://twitter.com/kycovid19data/status/1480379410222096387?s=20 . There have been a series of deaths of athletes and other seemingly young and healthy people in recent weeks.

"I get vaccinated five to six times a day and I feel great!!" Tweeted @bobsaget on July 31, 2021. On December 11th, Saget told his podcast audience "I got my booster shot. I’m 65. So I got it yesterday…uh…the day before, and I was hurting."

Bob Saget's acting roles included Danny Tanner on the sitcom Full House, its sequel Fuller House, and the voice of narrator Ted Mosby on the sitcom How I Met Your Mother. The 6 foot 4 inch comedian was on a national tour he called "I don't do negative."