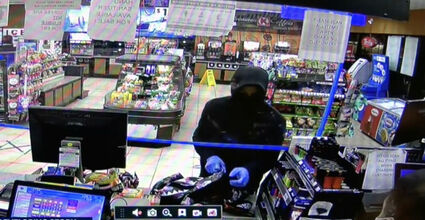 7/11 at 5800 Bellflower Blvd in Lakewood was the scene of one of 3 convenience store robberies.

LA County Sheriff's are seeking 3 suspects in a series of armed robberies that occurred at convenience stores on Monday night, officials said. Suspects wearing the same clothing took place in all three robberies. One of the robberies was caught on video and all the robberies occurred at 7-Eleven stores, in Southeast LA.

The first occurred at 9:10 p.m. at a 7-Eleven in the 5800 block of Bellflower Boulevard in Lakewood. Los Angeles County sheriff's deputies received a call regarding a silent alarm. Deputies were told three masked suspects wearing black clothing entered the business, drew weapons and demanded cash. 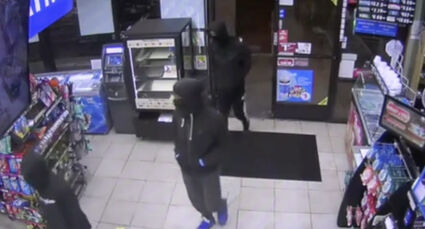 7/11 at 5800 Bellflower Blvd in Lakewood was the scene of one of 3 convenience store robberies.

At 11:40 p.m., deputies received another call about a robbery that occurred at a 7-Eleven on the 8500 block of Alondra Blvd. in Paramount. The convenience store clerk reported that 3 men wearing all-black clothing and masks, came into the store with guns and demanded money. The suspects were last seen running eastbound on Alondra Blvd. 15 minutes later, deputies received a third robbery call at another 7-Eleven on the 17200 block of Downey Blvd. in Bellflower. Three suspects in all-black clothing wearing black ski masks took money from the cash register, officials said. The suspects were last seen driving northbound on Downey Blvd. in an older white four-door Mercedes.

After the third robbery, the LASD was contacted by the Long Beach Police Department with regard to additional robberies that occurred in the area. The suspects in those robberies also matched the descriptions of the suspects.