Who knew that you could find Bigfoot buying beef jerky in a retail American store?

The Under Doge, a woman who lives in Atlanta, GA, claims to have seen Sasquatch waiting in line to buy beef jerky at BJ's Market. The crypto creature did not actually speak to anyone. But who speaks to anyone in line anymore?

"People go their whole lives looking for the big guy in the woods when all they had to do was get a bjs membership! Who knew?" reported the Under Doge. She has 28,000 followers, and the tweet has 221 likes.

Was he wearing a mask? Did he have proof of vaccination? "No, I didn't dare ask!" she wrote, adding "And apparently he eats pretty good in the woods & with the occasional bag of jerky Face with tears of joy." 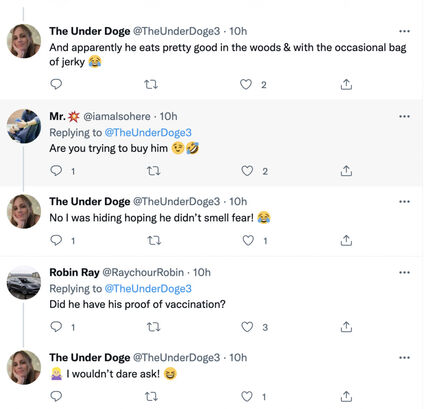 Bigfoot, also commonly referred to as Sasquatch, is a purported ape-like creature said to inhabit the forests of North America. Many dubious articles have been offered in attempts to prove the existence of Bigfoot, including anecdotal claims of visual observations as well as alleged video and audio recordings, photographs, and casts of large footprints. Some are known or admitted hoaxes, reports Wikipedia.

Tales of wild, hairy humanoids exist throughout the world, and such creatures appear in the folklore of North America, including the mythologies of indigenous people. Bigfoot is an icon within the fringe subculture of cryptozoology,[8] and an enduring element of popular culture, says Wikipedia.