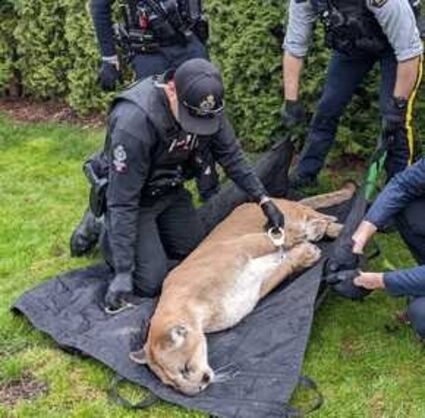 Police in suburban Vancouver Canada place handcuffs on the paws of an errant mountain lion who slipped into town.

2/16/22 The RCMP has arrested a cougar in a neighborhood of Vancouver. For, well, stalking I guess. This from CanadaPoliceReport.com. The report is reprinted below. The cougar was tranquilized, and released elsewhere. Which impressed me especially, since I witnessed Santa Monica police shoot a mountain lion who wandered into downtown Santa Monica in 2012.

The cougar is also called Puma, Mountain Lion or Catamount. The big cat is listed as Least Concern by biologists, who not nevertheless that It is threatened by habitat loss, habitat fragmentation, and depletion of its prey base due to poaching. In Florida, where there is a small remnant population, it is threatened by heavy traffic, which causes frequent fatal accidents involving cougars. Highways are a major barrier for dispersal of cougars

February 16, 2022, Maple Ridge, BC – Ridge Meadows RCMP go above and beyond to assist with the relocation of a cougar in busy Maple Ridge neighborhood.

On February 13, 2022 at 3:00 pm, Ridge Meadows RCMP received a call from a resident stating that they had seen a cougar in their backyard. A frontline officer and BC Conservation officer attended the 11800 block of 230th Street and located the cougar.

Due to the dense populated area and the risk to the public, with it being a beautiful day and people out in their backyards, the Conservation officer advised there was a high likelihood the animal might need to be euthanized.

After a discussion it was determined that Police could provide enough resources to adequately secure the surrounding area, the neighbouring residents would all stay inside their houses and conservation officers would tranquilize the cougar with over watch from officers.

The cougar was safely tranquilized and cuffs were utilized until the conservation officer could secure the cougar for appropriate transport and relocation to an undisclosed area. 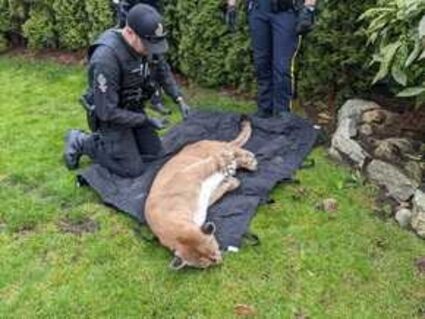 "Thank you to all the residents who stayed inside and assisted with the best possible outcome for this animal." States Sgt. Hiesler. "We certainly did not want to see this beautiful creature euthanized and so, due to the public's assistance, the cougar was able to be relocated safely."

Maple Ridge is a city in British Columbia, Canada. It is located in the northeastern section of Greater Vancouver between the Fraser River and the Golden Ears, which is a group of mountain summits which are the southernmost of the Garibaldi Ranges of the Coast Mountains. Maple Ridge's population in 2016 was 82,256. Its downtown core is known as Haney.