A Group of Russian Soldiers in Kharkiv Captured In Elevator After Ukrainians Turn Off The Power.

Who Takes an Elevator during an Invasion? This Patrol of Russian Soldiers, Apparently 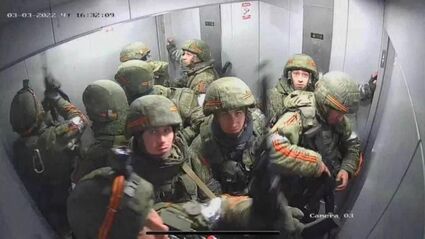 10 Russian soldiers caught in an elevator

A patrol group of 10 Russian soldiers were captured in an elevator by Ukraine territorial defense, claims the Eastern European news website 24 Visegrad.

A security camera captured this photo of the soldiers, who look like they've just realized their error. They were apparently trying to reach the rooftop to take up sniper positions. The oldest rule of warfare, after all, is take the high ground.

"A team of Russian soldiers wanted to use the elevator to reach the roof of an office building. The Ukrainian administration of the building trapped them inside by cutting off the electricity. The Ukrainians also used an industrial camera to take this commemorative photo," says the tweet from Visegrad 24. 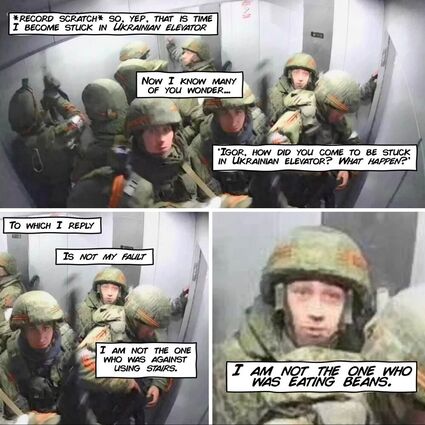 They're doomed to hear "The Girl From Ipanema" on loop until further notice.

Russian troops captured in an elevator. Who takes an elevator during an invasion?? Tweeted one person.

Is the photo authentic? "The date on camera from 03. 03. 2022 is actual and Guy appears using his weapon against the door," tweeted one person, who said he believed the men went into the building hoping to find food. Oksana added that this uniform type of Russian soldier are called "Colorados," because they have strips on their uniforms looking like Colorado potato beetles.

"They're doomed to hear "The Girl From Ipanema" on loop until further notice," tweeted an American. "Baby shark is the preferred torture song I'm pretty sure!" replied another man.

Other comments referred to Hans Gruber from Diehard, saying "you got trapped where?"

You’re quite correct. Mirror image, or Russia has cloning down pat (poor blank boy soldier in far left and right).

There are only 5 of them, the back wall of the elevator is mirrored.