"Strange that he didn't remember how he lied to his own bosses as a young KGB officer. Such lying is common in the culture." 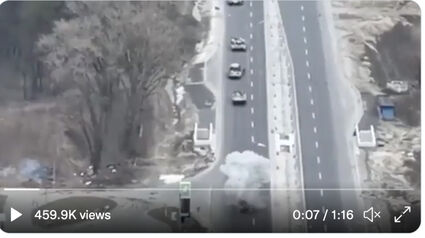 Ambush of a Russian tank convoy

I talked with an Estonian analyst who has access to info and whom I regard as one of the best we have here. His main conclusion: "The danger is far from over but there is reason for a very cautious optimism. Russian advance has clearly stalled." More below:

Since last Saturday, it's been relatively stable on the fronts. There is an expectation that the Russian Armed Forces will re-form units and press a new line of attack, but so far little evidence of it. "If Russia doesn't achieve a remarkable advance by end of week, difficult to see how it should come at all."

The Southern line of attack has split in 2, one advancing toward Mykolaiv, the other to Kryvyi Rih. This is serious risk to RU forces as the supply lines, which we already know are crap, will be dragged even longer. "This leaves the Ukrainians plenty of chance to 'beat them to pieces'.

The question is if Moscow today forces Lukashenko to send in the troops from Belarus, but BY troops' motivation is even lower than that of RU. "The Western-Ukrainian national & anti-Russian environment would be extra hostile towards them."

The idea of bringing in Syrian fighter is extra desperate. "One thing is to fight in the narrow streets of Arabian cities. It's something else in Kyiv or Kharkiv where the boulevards are 100m wide." Also refers to cold climate and low morale of Syrians.

About possible mobilization in RU. That was on the agenda last Friday in Fed Council and duma but allegedly high-ranking military re-convinced Putin. "Reserve units have no training, they even don't have enough uniforms for them."

"They've included very few reservists in Zapad exercises. Of the few thousand they usually include, the officers complain about them "messing up" the exercise." 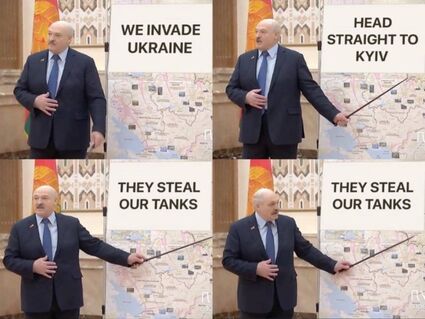 Fatigue of RU units "massive". A third has been replaced, but incoming units have even worse quality. Another third has been destroyed, killed or wounded. Re-formation of units doesn't have a good impact on combat capability.

Ukraine's counter-offensive has so far been small-scale but when RU stalls, they have resources to start pressing. First aim would be to drive RU out of country in the North (Kyiv and Kharkiv).

It will be more difficult to gain back ground in South, also because of terrain. "In steppe you will be an open target from air."

Regarding Russia's shortage of missiles. "Putin was told he had 10,000 missiles. In fact, he had 1,000. It's peculiar he didn't remember how he was lying to his own bosses as a young KGB officer. Such lying is common in the culture."