We are receiving reports that amidst the Ukraine Russia War, Iran has launched 4 missiles towards the US consulate in Erbil, Iraq. No one was injured on the ground.

"No casualties have been reported after #missiles reportedly struck #Erbil, the capital of the autonomous Kurdish region of northern #Iraq, Reuters reports citing the Iraq state news agency who is quoting the Kurdistan health minister." says Al Arabiya

"A new video has appeared showing the massive missile strike fired from Iran against the U.S. Consulate in Erbil, Iraq. Significant destruction on the ground by no reports about casualties yet," tweeted an Eastern European news service, Visegrad 24. We are awaiting confirmation of this report, but it would probably represent a Putin backed strategic distraction for the United States. 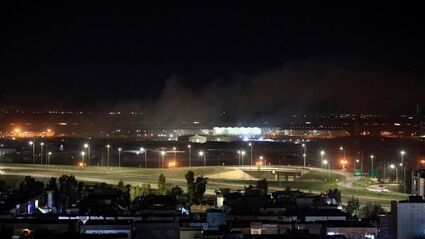 From the Jerusalem Post: A number of missiles were fired towards the US consulate in Erbil in northwestern Iraq on Saturday night, according to the Iraqi News Agency (INA).

The governor of Erbil, Omed Khoshnaw, stated that multiple missiles fell in the area, saying it was unclear whether the target was the US consulate or the airport in the city. According to INA, five explosions were heard in the attack.

The health minister of Kurdistan stated that there were no injuries or deaths reported in the attack on Saturday night.