Tucker Carlson: Russian Accusation that US Has Funded Bioweapons Labs in Ukraine, is Kinda True

It's probably career suicide, but Tucker Carlson says the Russians are not entirely wrong about their claims

Tucker Carlson: Russian Accusation that Ukraine has US Funded Bioweapons Labs is Not Entirely False

In a story that this reporter anticipates will get Fox News Host Tucker Carlson fired; Carlson basically said that the US is lying about its bioweapons program in Ukraine, not Russia

"Military biological development labs funded by the US are under development in Ukraine. That's the Russian claim," said Tucker

"What exactly are they, the US Government, doing in these secret biological research labs? Ukraine is the poorest country in Europe, it's not exactly a hotbed of biological research. Why did you go out of your way to lie about this?" Tucker said, referring to Victoria Nuland.

"Because it turns out we just spent the last 2 years living with the result of another foreign US Funded biological weapons lab." said Carlson

He also interviewed Sen. Tulsi Gabbard (D). The former US Presidential candidate said "the US is funding biological research labs around the world, including in Ukraine. These labs need to be shut down immediately."

"The price of gas is going through the roof, food prices are going to skyrocket even higher than they are already, and we're facing the very real possibility of war with Russia-a nuclear holocaust. And for what? We still haven't yet received an answer to this question," she later tweeted.

The defense official's rejection of the Russian narrative came after Undersecretary of State for Political Affairs Victoria Nuland told the Senate Foreign Relations Committee on Tuesday that Ukraine does have labs, and that the U.S. was helping them keep Russia from taking them over.

"Ukraine has biological research facilities which in fact we are quite concerned Russian troops, Russian forces, may be seeking to gain control of, so we are working with the Ukrainians on how they can prevent any of those research materials from falling into the hands of Russian forces should they approach," Nuland said.

Nuland said this in response to a question from Sen. Marco Rubio, R-Fla., about whether Ukraine had chemical or biological weapons.

Nuland said that if there is any biological or chemical attack in Ukraine, "there is no doubt in my mind" that it would be carried out by Russia, and that it is "classic Russian technique to blame on the other guy what they're planning to do themselves." 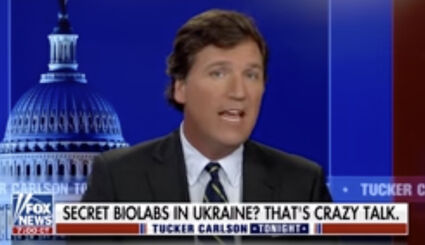 State Dept. denies that the US funds bioweapons labs anywhere.

This is not the first time that Russia has accused the U.S. of backing biological weapons labs near its borders. In 2018, the Kremlin alleged that the U.S. was funding a secret biological weapons lab in the country of Georgia, which they claimed was one of several labs the U.S. had near the borders of Russia and China.

A Pentagon spokesperson denied this at the time, calling the claims "an invention of the imaginative and false Russian disinformation campaign against the West" and "obvious attempts to divert attention from Russia's bad behavior on many fronts."

It should be noted that Tucker Carlson, host of Fox News' top rated national show, is alone at Fox in many of his opinions. His opinion on the Ukraine biolabs run by the US, is apparently limited to Carlson among Fox News hosts.