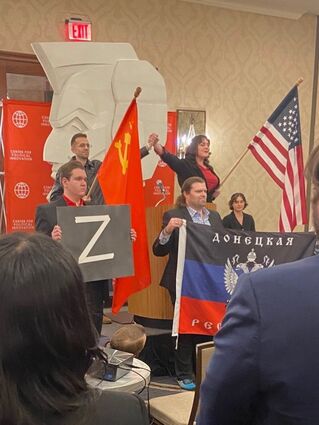 While the majority of Americans both on the political right and left, deplore last month's Russian invasion of Ukraine; a few welcome it as being on the right side of history.

"CPI opening ceremony with Soviet and American flags with The Internationale and The Star-Spangled Banner playing in the background before the unvailing of the Donetsk People's Republic flag! Proud to be apart of this historic day!" Tweeted Dr. Ryan L. Cotten. He is a self described "Marxist-Leninist," anti-imperialist, and a pharmacist from Wisconsin.

Needless to say the event was savagely pilloried on Twitter. "Experiments in touching the possible peak intensity of cringe political opinions." tweeted one man.

"How can you describe yourself as an “anti-imperialist” when you support the forcible annexation of countries? I refer not only to recent Crimea, but also the Soviet annexation of the Baltics," tweeted another. "Not only that, but I didn't have communists shilling for fascists on my 2022 bingo card."