By Alita Arose
Special to the Observer

In anticipation for Nina's new film Brainwashed: Sex-Camera-Power, a retrospective of her prior films gets featured at an LA indie theatre 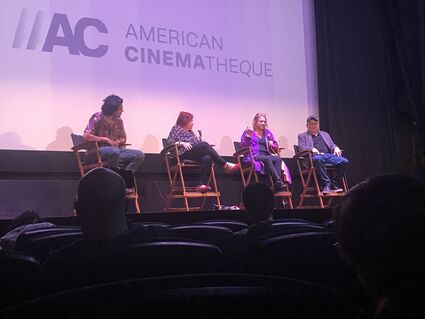 In anticipation for Nina Menkes' new film Brainwashed: Sex-Camera-Power, a retrospective of her prior films gets featured at an LA indie theatre

Phantom Love (2007) by Nina Menkes, was featured as part of a one month long retrospective of her work, presented by the American Cinematheque at Los Feliz and Aero theaters in LA. Along with her multiple other titles including and not limited to Queen of Diamonds, Magdalena Viraga, and The Bloody Child, it took up space on the big screen during the month of MARCH 2022. The Brooklyn Academy of Music (BAM) in New York, also presented a comprehensive retrospective of Menkes' work this March.

Films directed by women are anomalies. As Menkes poignantly states, “female subjectivity is like the devil…. The idea that women have deep experiences that are important and significant is still very threatening.” She and her colleagues shared in the post show Q and A that "for women, it's impossible [to be a film artist]…even after showing at Sundance and getting rave reviews, and a Los Angeles Film Critics award, plus many other accolades...[I] never got a phone call, never got an agent, never got a budget.”

She did however, remain committed as an artist. She has made the impossible possible. Her films are true works of art. Her style is subversive; the films are more about offering the viewer an experience that transforms them than they are about offering titillation and entertainment.

Phantom Love chronicles the story of Lulu, a Russian Jewish woman dispossessed from her own self. The film unravels like a waking dream: surreal, visceral and visually captivating. The viewer is drawn into her disembodied states, and all the while begins experiencing themselves as more embodied while the film moves forward. One can thank her genius filmmaking style for this.

Phantom Love shares a large percentage of its screen time with long casino scenes and long sex scenes. These sex scenes reveal the paradox of sex and how an act so physcially intimate can be paradoxically so pyschologically and spiritually alienating. Lulu, the main character, is shown disassociating throughout every scene of taking her boyfriend. While the scenes are void of pleasure, one soon finds a calm groundedness to them as they offer a level of constancy to the unraveling story.

Phantom Love plays out like a painting. One is given the generous opportunity to interpret the different scenes in a way which brings themselves closer to the truth of their own essence. This is what any good art does. One’s shadow is moved a little closer to their center, and integration unfolds.

Splintering, shattering, and fragmenting are motifs throughout this film. One iconic scene shows Lulu ascending from her bed in a ghostlike apparition, only to become obliterated into dust from midair. The scene cuts to wartorn India, eliciting both contrast and rhyme. The few men who play a part in the film are either angry, obtrusive, fundamentally dogmatic, or completely disconnected from truth. Thankfully, Lulu does come home to a powerful aspect of herself in the final scene, right after the viewer witnesses her floating in a rejuvenating body of water for a sweet, long minute.

One can practically taste the years of jungian psychoanalysis Menkes has experienced in watching her films. The scenes are drawn out, layered with rich symbolism. It is impossible not to feel when experiencing her films. While Lulu is not the most embodied woman one may have encountered, the experience of witnessing her turmoil and frozen states serves as therapy to the viewer. It is like one can suddenly see and digest aspects of their own shadow when going through the journey of her story.

Nina’s work comforts the artist. Her films are a testament to there being no rules in cinema. While remaining true to one’s artistic essence is a struggle with a high price, Nina affirms it is a price well worth it “to make your own work.”