Our treasured downtown is so tarnished that a retailer would no longer stay, even for free rent. 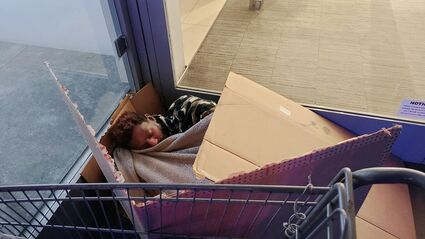 Our downtown has become a de facto, and wholly inadequate, homeless shelter; photo from the Third Street Promenade

May 2, 2022 - Santa Monica City Councilmember Phil Brock says he "got triggered" when he discovered that the dumpster rooms in downtown's public garages are left open at night for the homeless. They are used as bedrooms, bathrooms, drug dens, and have served as initiation points for numerous fires. Brock claimed in an interview he had been promised the dumpster rooms would be closed at night months ago. This clearly had not happened.

In response to this information, Brock wrote the below email of his own, decrying the city's lack of attention to basic hygiene, let alone law and order. In it, Brock states he supports a dissolution of Downtown Santa Monica, Inc, the quasi-governmental body in charge of that area. He also wants a replacement of the current "safety ambassadors" with a private security force willing to enforce laws. "I don't care if they're armed guards," Brock said in the interview. What he does want is for every person, housed or unhoused, to be accountable to the law.

For the record, I had already visited the areas you have described as neglected several times and am similarly frustrated by the lack of municipal attention to the quality of life and security problems in downtown Santa Monica. Many of us have repeatedly demanded that our downtown be safe, be clean, and be able to be a place that our residents, workforce, and visitors covet. We agree that it is not an area that Santa Monicans can be proud of now.

To that aim, I fully support the removal of the safety ambassador team as currently constituted and that they be immediately replaced by a high quality, armed, private security force and both armed and unarmed details of the SMPD be placed there. Our public parking garages must be 100% functional, clean, safe, and inviting every day. Our alleys and waste receptacle areas need to be similarly safe and inviting at all times. Having homeless outreach and security coverage on a 18 hour a day coverage plan is insufficient when the problems of our downtown are 24 hour a day issues.

The board make-up of Downtown Santa Monica Inc is unable to sufficiently tackle these urgent issues. To be clear, we are in crisis in our treasured downtown. Studying the issue, discussing the problems, and ultimately choosing inaction over problem solving is a failed plan. The board members we choose for DTSM must be stakeholders within downtown who have business and shopping center management experience. Simply put, my phone call two weeks ago about the conditions I saw in mid-day on the Third Street Promenade were ignored and the final answer was, "We need to raise the assessments to get more security and the property owners won't like that." I know what the property owners, merchants, and residents like even less...not feeling safe and secure in downtown Santa Monica.

Our restaurant and retail operators work hard in an almost impossible situation. Our property owners deserve better. It's been time to act for a long time. The inaction has led to stagnation and to further decline. I talk to stakeholders downtown almost daily. They are constantly seeking solutions and they see none forthcoming. We can remove Third Street from the public streets index. We can close it overnight for cleaning, for safety, and to control the seemingly uncontrollable problems in downtown. The one thing we can no longer be, is passive. 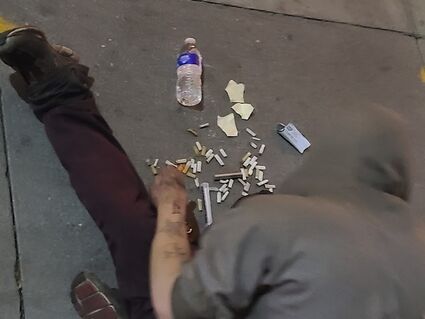 Cigarettes and a syringe are this man's important possessions; shot in a downtown Santa Monica alley

I will support a dissolution of the current board of DTSM. I will support the immediate creation of a new security apparatus downtown that meets the needs of all stakeholders. I will support a new solution for our city run parking structures that recognizes that they are the front doors to downtown and must have a unified safety, cleanliness, and maintenance structure. I will support an open, secure restroom facility in downtown Santa Monica to eliminate the "brown emergencies" that our city's custodial staff, merchants, and residents face each day. In addition, the needs of residents downtown with regards to noise pollution must be faced head on.

I could go on but it's time to stop the excess talk and turn to action. It was reported to me that yet another national boutique retailer will close its doors soon. The victims of a lack of security which leads to a lack of customers. They decided they would not stay even if their rent was completely negated by the property owner. When is the premier shopping area of our treasured downtown so tarnished that a retailer would no longer stay, even for free rent.

Let's solve these problems. They are not intractable.

You conveniently left out the part where Phil Brock said he's tired of hearing from John Alle, whom he compared to Chicken Little. Just as I've been saying all along, neurotic John Alle whines & complains so much, city leaders tune him out. I know you won't publish this comment because it goes against your MAGA / NIMBY narrative. The Observer is tabloid trash.

Phil, I think you're more aware of SM's dire problems than the radical members of the city council, but, I sense you're timid. You're trying to tug the city away from the far left trash heap on which it has dumped itself, while not alienating those progressives. You can't have it both ways, Phil. We appreciate your showing up at the Villanueva meeting, but, my sense, and I may be wrong, is that you're STILL trying to be in the middle, trying not to step on progressive toes. Be bold, Phil. You will be more successful in local politics if you manage to lead this town out of the present sewer drain. Be bold, be confrontational with those on the city council, including Himmelrich, Davis and McCowan, who like the present anarchic version of Santa Monica. Confront them, fight like cats and dogs with them, raise your voice, and BEAT THEM. It's no time to be timid with these devils who have destroyed our town. If you don't become more bold, more assertive, you will lose support soon!

Bravo, Mr Brock! We need a common sense majority of people who think as you do on the City Council. NOTHING will change until that happens. The pathetic neo communist socialists who have run this town since 1979 need to be kicked out! It's time to take our once beautiful city BACK!!

Excellent. Many of these observations and solutions can be expanded to beyond the downtown area. Please bring your proposal to the Council for a vote as soon as possible, but in any case well before the upcoming election. Let's get every Councilmember on record.