Covid-19 Cases May Be Increasing in Los Angeles County with BA2 Variant of Omicron, But Serious Illness is Not 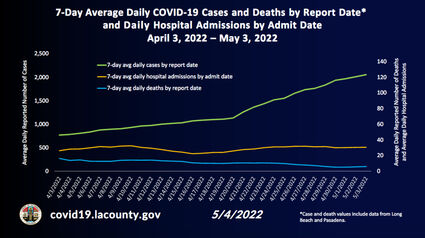 May 11, 2022 - Covid-19 cases have slowly been increasing across Los Angeles County. Due to the number of home tests available and free, there are perhaps even more cases than public officials know. And yet hospitalizations and deaths have remained very low.

The relaxing of a correlation between the number of infections and the number of severe cases is probably attributable to the fact that the SARS-CoV-1 virus, like most other viruses, has grown less deadly with each mutation.

A comparison between the weeks leading up to the Delta surge last summer and the current increase in cases shows a marked decrease in hospitalizations and deaths caused by the currently prevalent BA2 variant and the previous Delta variant.

A high of 1,790 people hospitalized

A high of 297 people hospitalized

Despite the allegedly more infectious BA2 variant and the removal of mask and vaccine mandates, there have been 45% less cases during the current period than during the summer, when masks and vaccines were mandated to try to control transmission. But the arrival on the scene of massive numbers of home tests may be artificially depressing the number of current cases. 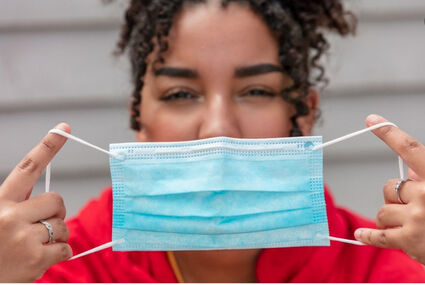 The county no longer publishes the current case fatality rate, but if one wants a rough estimate of how it has changed, it is possible to look at the overall deaths-to-case ratio and compare today's ratio to that of, say, September 30, following the Delta surge. On September 30, the overall death-to-case ration (from the beginning of the pandemic) was .0179. On May 2, that same ratio was .0111. The ratio improved 38%. This is some indication of how much less fatal Omicron is compared to Delta (which in turn was less fatal than the Alpha strain). The improvement is actually much greater than 38% since it includes all the cases prior to September 30.