In 2014, I saw him hit her, call her names, hit her while holding her hair, in front of his nurse Debbie Lloyd and his personal assistant Travis 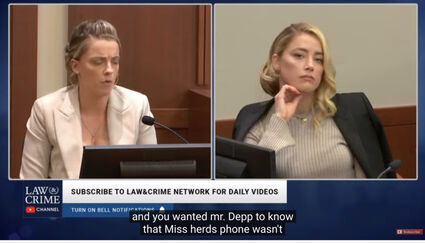 Amber Heard's sister Whitney Henriquez testified on direct examination. Below are my notes, as she testified.

My sister really changed during her relationship with Johnny. She became anorexic, weighed maybe 100 pounds. She was listless, hopeless, cried all the time.

I did cocaine with Johnny more than once. He was always on drugs and /or drunk when I saw him. He used to call her names, "whore, bitch, cunt."

March 21, 2013, the Keith Richards incident. I arrived at the Orange Apt in the afternoon. I came in and Orange was typically neat and clean, as soon as I walked in there was smoke in the air.

There was furniture askew Johnny was wearing glasses, there was cocaine and booze in front of him.

He said he would leave on condition that Amber also left. I was in the front with Sterling, the driver. At some point I heard the back window open, and Johnny is holding our dog out the window. I froze, I was scared. I knew how inebriated he was, I thought if he lost her somehow, she was just going to go out the window.

He laughed and brought the dog back in the car, made a joke about putting the dog in the microwave.

In 2015, I'd occasionally see bruising, cut lips, split lips. I'd see scratching on her arm. There were injuries to her. I did at some point confront her about it.

June 2013, were you in attendance in Hicksville? Yes, Hicksville is this collection of themed airstreams. We went with a group of our friends. I opened Amber and Johnny's airstream. There were shrooms and cocaine on the counter. I didn't think anything of it, and then the next day when everyone was cleaning up, I heard about an altercation the night before.

I observed people cleaning up after the night. I went to my sisters trailer. It looked like a bomb had gone off in there. Somebody had ransacked it.

Sept. 2013, what did you do with Mr. Depp about London? Around the time of my birthday, Amber was filming in London. Johnny thought Amber would like it if we surprised her on set. Johnny and I and our father flew to London and we saw Amber.

We had dinner at the hotel that night or the next night, and Johnny picked up a steak night and hurled it at his assistant. He missed.

A fight broke out between Amber and Johnny that night. I flew back to Los Angeles, and at some point during that flight, they got engaged.

In November 2014, Hollywood Film Awards, I went to Sweetzer. Johnny had several houses on that street. I was summoned to 80 Sweetzer, which Johnny referred to as the Man Cave. When I got there, Johnny was outside and very drunk.

So I go to PH5 where Amber and Debbie and Travis were all standing in the kitchen. I could tell Johnny's clearly drunk. Again, he's talking to me about how Amber found text messages between Johnny and Rochelle. She's meaningless, she's nothing special. Amber made me do it.

Amber is on the mezzanine level of PH5, and she starts shouting at him.

Debbie Lloyd was his nurse at the time. Me and Debbie and Amber are on the Mezzanine which overlooks the kitchen and living room. Johnny hurls a red bull can and it hits Debbie in the back.

He comes up and hits me in the back. Amber smacks him, "don't hit my fucking sister." But by that time he had grabbed amber by the hair and was whacking her. Travis pulls them apart.

Johnny says, "I fucking hate you both, you're both fucking whores." I go, I see her closet has been completely destroyed. There was art off the wall, the place was destroyed.

Johnny accused me of selling stories to the media in violation of an NDA that I had signed, so I moved out.

In April 2016, Amber's 30th birthday party, we wanted to make it special. All of her close friends were there, Johnny showed up very late. And he was drunk when he showed up. We went around the table and told stories about Amber, nice stories. 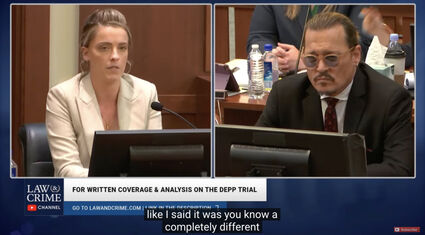 Her perfect ass left a perfect imprint on the couch, after he met her on rum diaries. All of us had said really nice things about Amber, and he's talking about her ass.

Depp was planning on coming to Coachella with us. That night he said he would. But he didn't.

Amber has tried really hard to move past the Johnny Depp relationship. Her reputation is all that she has. She doesn't have piles of money. To say that these things are not true, we had just married our mother. She started to have panic attacks. The statements (Depp) was making in the media, very much affected her. She would periodically break into tears.

She was so unwell she stopped sleeping again. She was super anxious, it was similar to the Amber I saw in 2016 when she was trying to get out of the relationship. She cried a lot.