Transgender Climate Activist Smears Cake on the Mona Lisa by Leonardo da Vinci at the Louvre Museum in Paris, France

Behind a bulletproof glass installed after a 1956 attack, the masterpiece was undamaged in the latest attack

The Mona Lisa on display smeared with cake on Sunday. Fortunately the world's most painting is behind protective glass, and was undamaged.

May 30 An unnamed suspect disguised as an elderly woman in a wheelchair smeared cake across a piece of glass that protects the Mona Lisa at Paris' famous Louvre museum. He was sent for a psychiatric evaluation according to Paris Police. The painting was undamaged.

The incident happened on Sunday May 29, 2022 when the man, who wore a black wig and lipstick, abruptly smeared the glass with a piece of cake. He shouted something about saving the Earth just after the attack.

Wikipedia says that the Mona Lisa has been described as "the best known, the most visited, the most written about, the most sung about, the most parodied work of art in the world". The painting's novel qualities include the subject's enigmatic expression, the monumentality of the composition, the subtle modelling of forms, and the atmospheric illusionism.

The painting is probably of the Italian noblewoman Lisa Gherardini, the wife of Francesco del Giocondo. It is painted in oil on a white Lombardy poplar panel. Leonardo da Vinci who painted it, never gave the painting to the Giocondo family, and later it is believed he left it in his will to his favored apprentice Salaì. 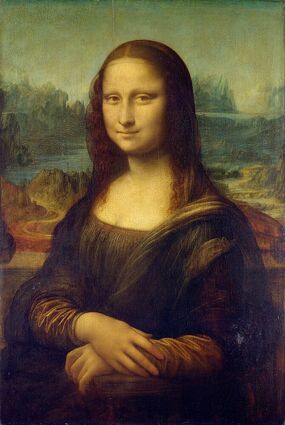 The Mona Lisa on display smeared with cake on Sunday. Fortunately the world's most painting is behind protective glass, and was undamaged.

There have been a number of attacks over the years on the priceless painting. On 30 December 1956, Bolivian Ugo Ungaza Villegas threw a rock at the Mona Lisa while it was on display at the Louvre. He did so with such force that it shattered the glass case and dislodged a speck of pigment near the left elbow. According to Wikipedia, the painting had been protected by glass because a few years earlier a man who claimed to be in love with the painting had cut it with a razor blade and tried to steal it.

Since then, bulletproof glass has been used to shield the painting from any further attacks. Subsequently, on 21 April 1974, while the painting was on display at the Tokyo National Museum, a woman sprayed it with red paint as a protest against that museum's failure to provide access for disabled people.

On 2 August 2009, a Russian woman, distraught over being denied French citizenship, threw a ceramic teacup purchased at the Louvre; the vessel shattered against the glass enclosure. In both cases, the painting was undamaged.