"One of four Russian bases in Melitopol hit, another heavy blast in Belgorod, another large depot destroyed in Popasna" 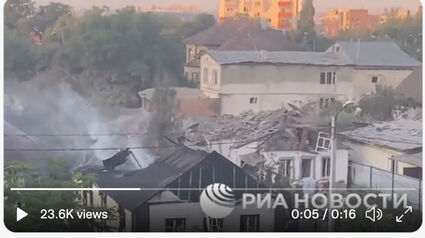 7.3.22 RIA Novosti reports that a Ukrainian Tochka 21 Short Range Ballistic Missile or SRBM, has fallen in Belgorod, a city some 20 miles from the Ukrainian border inside Russia.

Russia has been heavily criticized for over 100 instances of hitting Ukrainian civilian targets with imprecise missiles designed in the 1970s, such as the KH-22 Kitchen missile that hit a shopping center in suburban Kyiv last week, killing 17 civilians. So it is not surprising that RIA Novosti, a Russian official state media service, would claim that Ukraine Army is doing the same thing.

For it's part the Ukraine defense ministry neither claimed nor denied this particular action. Ukraine has hit Belgorod on occasion, usually with missiles fired from MI21 helicopters. 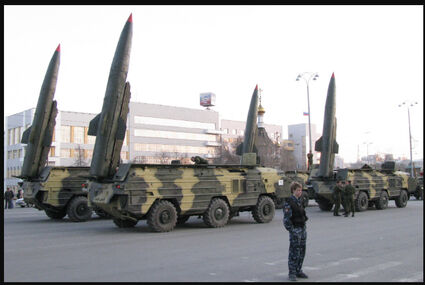 Tochka-21 SRBM on parade in Yekaterinburg, Russia in 2010. Note that it must be raised on its truck mounted launcher, in order to be fired.

"One of four Russian bases in Melitopol hit, another heavy blast in Belgorod, another large depot destroyed in Popasna," tweeted Illia Ponomarenko, a journalist with the Kyiv Independent, an English language news source. "It’s a daily, organized campaign to wipe out Russian military infrastructure and undermine its immediate war effort in Ukraine. We did not have this before," he added.

The OTR-21 is a mobile missile launch system, designed to be deployed along with other land combat units on the battlefield. While the 9K52 Luna-M is large and relatively inaccurate, the OTR-21 is much smaller. The missile itself can be used for precise strikes on enemy tactical targets, such as control posts, bridges, storage facilities, troop concentrations and airfields. The fragmentation warhead can be replaced with a nuclear, biological or chemical warhead. The solid propellant makes the missile easy to maintain and deploy, says Wikipedia.