Did a giant #Sasquatch live and die in the Canadian wilderness and if so, did he support the government of PM Trudeau?

Legendary explorer and troll Coyote Peterson claims to have found the skull of a bigfoot or sasquatch skeleton. A self described "Animal Expert, Adventurer, Author, and Host!" Peterson is seen in recently released video, pulling the skull of a large primate out of the mud in a place he identifies as British Columbia, Canada.

Peterson posted the discovery on Facebook: "BREAKING NEWS: Leaking pics here before they are taken down and before government/official try to cease our footage. Found a large primate skull in British Columbia - filmed it, cut the footage, releasing on @bravewilderness this weekend. Have kept this secret for several weeks… "

"YES I have the skull, its currently in a secure location awaiting primatologist review. Absolutely unreal… we thought it was a bear skull when we found it, I can 100% guarantee it is not. The skull was found partially buried under ground in deep back forest ravine after a massive storm in the Pac Northwest where clearly a bunch of trees and earth were disturbed. I’m sure these pics will be taken down… as will probably the video by government or state park officials… but the skull is safe. I don’t know if its what you all think it might be… but I cannot explain finding a primate skull in the Pac Northwest without wondering! What do you believe?" https://www.facebook.com/CoyotePeterson/posts/pfbid0xhJVjAzwCABz7KBCDoEsoMhLMxXyfy2E4cvosg88aoFjhnFA4JgBoBGkxmGgGmwnl

Livescience.com dismissed the claims as a hoax. In social media posts, writes Livescience, "Peterson wrote that he had hid the discovery "for several weeks" from government officials and any others who might "try to cease [sic] our footage" of the excavation. However, experts told Live Science that Peterson's claim is highly suspect and that secretly extracting and transporting animal remains across national borders may be illegal. 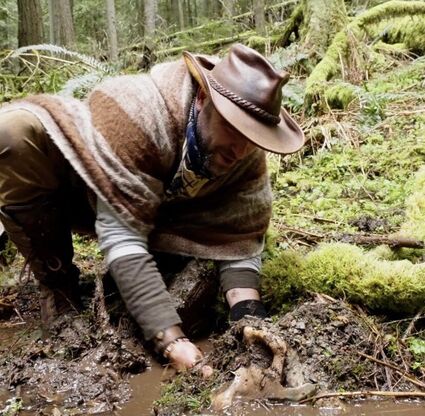 "I'm sure these pics will be taken down… as will probably the video by government or state park officials… but the skull is safe," the posts read. "I don't know if its what you all think it might be… but I cannot explain finding a primate skull in the Pac Northwest without wondering! What do you believe?" (There are no large primates that currently live in North America — other than humans — and though tales of elusive forest-dwelling hominids such as Bigfoot have persisted for centuries, there is no evidence to suggest such creatures exist.)

Peterson, best known for his YouTube channel "Brave Wilderness" and for hosting a series called "Coyote Peterson: Brave the Wild" on Animal Planet, also wrote that he'd release footage of the skull on YouTube this weekend. But in the meantime, scientists have reacted to his alleged discovery on Twitter, questioning the credibility of the claim and suggesting that Peterson's actions — as described in his posts — may cross ethical and legal lines.